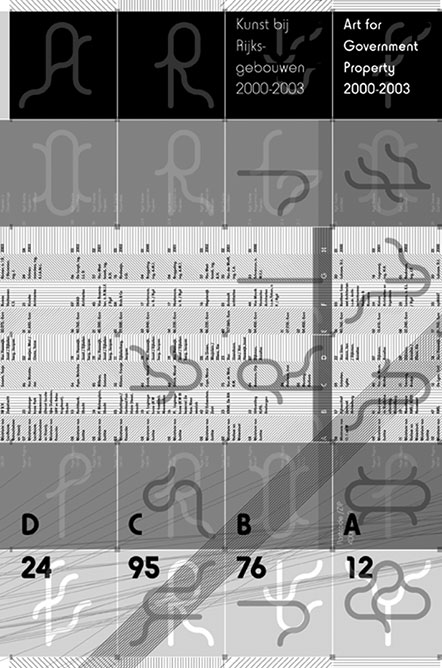 The Dutch State Buildings Department (RGD – Rijksgebouwendienst) has a long tradition of art in open (not always public) space in and around government buildings. The percentage formula in place since the 1950s has since become well-known: 0.5 to 2 percent of the construction budget is spent on an art project. This government policy has not only always been stimulating for artists, it has also had an effect on other commissioning clients. In the Netherlands this kind of initiative has maintained the approach to art in the open (and public) space at a high level, even in comparison with other countries. Following the lead of the RGD, more and more organizations took an interest in art around buildings. The ambitions for commissioned art increased accordingly throughout the intervening decades: from wall reliefs in the 1950s through monumental interventions that encompassed whole ceilings and squares in the 1970s to the current conceptual projects, which do not always have an evident visual form by any means. This shows how the discipline has matured, but also the courage the departments and organizations involved have shown in dealing with this sort of commissions. It also shows that the state – in spite of budgets under pressure – still plays an important role as a commissioning client in the development of new ideas in the visual arts. This is demonstrated in the book Kunst bij Rijksge­bouwen 2000–2003 (‘Art and State Buildings 2000–2003’), which summarizes the most recent projects.

This is not the first time the RGD has published a collection of completed projects. Various formats have been used, from dry encyclopaedic books to smaller cahiers with articles about five or six projects. The edition on the 2000–2003 period is quite heterogeneous in its organization. There is no clear line in content. There is an amalgam of projects, which immediately shows that a dictating vision from the top no longer applies. Projects are elaborated very specifically and autonomously per building. Chief Government Architect Jo Coenen, in his introduction, views this with some regret. He does not say so explicitly, but he seems to be favour of a more co-operative role for artist and architect in the conception of a building. He cherishes the memory of the collective artworks of the past. Margo Slomp, in her article, also notes a conceptualization of the project brief by the artists, resulting in artworks having more connection with the social context of the building than with its architectural conditions.

The book documents dozens of artworks, varying from architectonic constructions, glass panels, video projections and photographs to murals, text fragments, contemporary stained glass and traditional sculptures. For a number of large projects a clear programme has been devised, as at the National Museum of Ethnology in Leiden, for which a group of well-known non-Western artists – including Andries Botha, Mechac Gaba, Moshekwa Langa, Cildo Meireles and Chen Zhen (along with Dutch artists Roy Villevoye and Remy Jungerman) – contributed a work. Another programmatic example was twelve artists and designers filling in display-style windows at the Doggershoek youth correctional facility in Den Helder.

A demonstration of how experimental the RGD would like to be is a project by Stan Lewkowicz, a implementation of which was attempted in The Hague: a pink cloud over the Bruggebouw West building spanning the Utrechtse Baan thoroughfare. The high winds so close to the sea made the design unfeasible, but author Hans van den Ban celebrates it as ‘one of the high points of our collection’.

RGD commissions often involves buildings that are not freely accessible, with a clearly defined group of users. This challenges the artists into emphatically playing on the context of the building and seeking interaction with its users. In this process they do not shy away from a critical attitude toward the function or nature of the building. This attitude sometimes leads to projects that are more sociological than artistic in nature. For the prison in Zwolle, the available budget was even split in two: one portion was spent on an identity-giving sculpture at the entrance of the institution and the other went to buy materials and equipment for printing T-shirts in the prison’s creative department (partly in the form of workshops run by artists). In this way the RGD continues to try to expand and explore the boundaries of art commissions.

The book attractively demonstrates the breadth of the art policy of the State Buildings Department, but one must be prepared to flip through a great many pages to find a specific project or a particular artist. The book is frankly a mess to navigate because of an excess of numberings, totally incomprehensible project indices and impenetrable references. The cover turns out to be a poster, which may be meant to serve as a navigation aid, but when a poster is needed to find one’s way in a book, the damage has been done. Perhaps its design (by Richard Niessen) is an example of an artwork in itself, with a more experimental approach, but then it is one of the few projects in which the experiment is a failure.