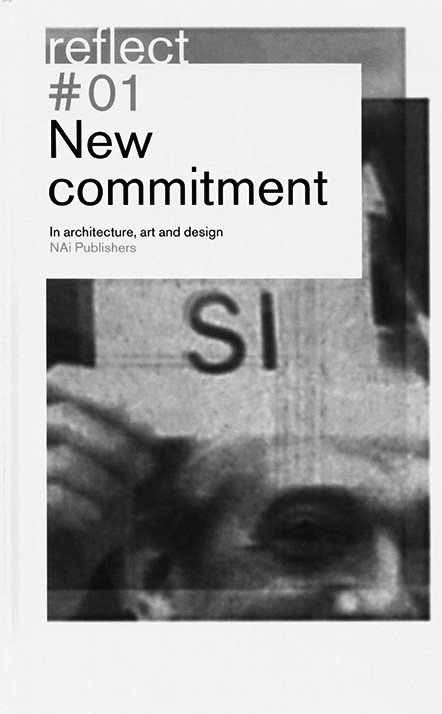 The new NAi series Reﬂect, a series of ‘books without preconceived notions’, aims to address a demand for reﬂection on meta-questions left unaddressed or merely mentioned in passing in many other books on architecture. In his introduction to the ﬁrst instalment, on engagement (or commitment), publisher Simon Franke reveals the conclusion straight away: ‘Commitment is difﬁcult, so much becomes clear after reading the articles in this book; much more difﬁcult than in the past, that is, in the 1960s and 1970s.’

Franke summarizes it well: for the majority of the writers in this collection the 1960s are the problem of contemporary engagement. Seldom have I read such agreement among such divergent authors in relation to a concept open to so many interpretations. This like-mindedness has less to do with the forms of engagement described in the book – these vary signiﬁcantly – and more with the general tenor of the vast majority of the articles: ‘After postmodernism, engagement as in the 1960s is no longer possible. That engagement was after all based on naiveté and we are not naive anymore.’ I’m summing it up somewhat crudely, but that is what I got after reading this ﬁrst instalment of Reﬂect.

In the opening essay René Boomkens describes postmodernism as the neurosis of a generation of spoiled airheads, who ﬁnd a refreshing sense of ‘new seriousness’ in ‘new engagement’. Based on his mistaken notion that ‘engagement is not an individual choice, but the expression of collective commitment to a crucial movement or development’, Boomkens gives ‘the errant individual’ one last hope: a new kind of collectivism, which actually implies an acceptance of the dissolution of the individual, as we thought we knew him, into a kind of collective individuality entirely put together from the shelves of the consumer society. In opposition to this stands the individual scepticism of what used to be called the ‘establishment’, now consisting of Baby Boomers disappointed with their own 1960s engagement. The disillusionment of these ex-revolutionaries expresses itself as scepticism toward any form of enthusiasm and thus erodes the seed-bed of any personal engagement.

Boomkens goes rather far, but his linking the ‘failure’ of 1960s engagement with the resulting quasi-impossibility of engagement in the present is echoed repeatedly by this congregation, which consists for the most part of (post) Baby Boomers. Lieven De Cauter: ‘Perhaps even this new commitment is no more than a trend...’ Hilde Heynen: ‘...a theme that seems to have been out of sight for long enough for it to be presented as something fresh and new today’. Ole Bouman: ‘...how architecture, after years of postmodernist dis-engagement, of philosophical deconstruction and digital experiments with form, can recover some measure of social signiﬁ­cance’. The only one who makes a brave attempt to formulate the conditions for a renewed engagement is the pre-Baby Boomer Henk Hoﬂand, the journalistic conscience of engagement in the Low Countries. He is also the only one who gives it a genuine deﬁnition, and one still quite applicable: ‘Commitment, in the original sense of the word, means being rationally involved in the world in which one lives, appreciating the human condition and, consequently, taking sides.’ Clear. And he concludes: ‘New commit­ment rests in (...) the outline of a new Utopia in which, in the ﬁrst instance, those capable of independent thought will break out of the prison into which they, as consumers, have locked themselves.’

This is a simultaneously encouraging and discouraging conclusion. Encouraging, because the old man, virtually alone, adopts an actively critical attitude toward the consumer society, an attitude one also ﬁnds among the newest generation, whereas the intervening generation of Baby Boomers surrender, disillusioned, to the inevitable triumph of the shopping culture. Because, alas!, Utopia, the Blochian ‘noch nicht’, the distant vision of man liberated! If one thing is clear from the articles by Hoﬂand’s juniors, it is that we should in fact be liberated by now from such illusions as ‘Utopia’ and ‘liberation’, and that engagement has become an institutionalized consumer product. There seems little hope that Hoﬂand’s ‘prisoners’ will revolt. The ‘revolt of the masses’ has been turned into a mass of lifestyle rebels. The uneasy engagement of the Benetton generation, let’s say.

The institutionalization of social involvement is a potentially suffocating factor for the rise of a ‘new engagement’, not just in the form of consumer idealism. In the Netherlands ‘engagement has now penetrated into every facet of society’, Lucas Verweij and Ton Matton observe. ‘It is a ﬁxed component in diverse government bodies, in associations, foundations, political parties and subsidy providers. Urban renewal, public safety policy and the Dutch government’s “Postbus 51” central information services are all semi-institutionalized forms of engagement that ﬂowed from a process of engagement’s social embed­ding.’ And more particularly in reference to the arts, Jeroen Boomgaard remarks: ‘Commit­ment has become so general in form and content that it lends itself without any difﬁ­culty to a prestigious existence in the ofﬁcial arts circuit.’ And he goes on to remind us that art institutions and engaged art have always had very difﬁcult relations.

Is there hope? Is there really a ‘new engagement’? From this book, I wouldn’t know. For intellectual debate it is of course good that more questions are raised than answered, but I would have liked to have seen more variation. Or a glimmer of analysis of contemporary engagement, instead of yet another nail in the cofﬁn of the engagement of the past. For the moment, as far as the present is concerned, it basically comes down to ‘we don’t really know what to do, but if we don’t do anything it’s going to get a lot less pleasant, so “new engagement” will do...’ A rather meagre sequel to the ‘doom thinking’ of the 1970s, which at least still offered hope of (radical) change and improvement. Is this all the result of the postmodern thinking that has declared ideology dead and proclaimed irony as its new idol? Probably. When the only one who dares to use the word ‘liberation’ in the context of renewed engagement is a man around 80 years of age, I fear for my own generation and pin my hopes on the newest generation, who know irony and disdain for ‘dogmatic do-gooders’ of the past only as historical pheno­mena. Why should we keep on whinging about an unresolved trauma from the ‘failure of ’68’, when the present compels us, as Hoﬂand says, to ‘take sides’. Putting off this choice in favour of an endless rehashing of the disappointment with what 40 years ago was as beautiful as it was impossible, is worse than repression – it is denial.