Essays on Culture, Media and Technology 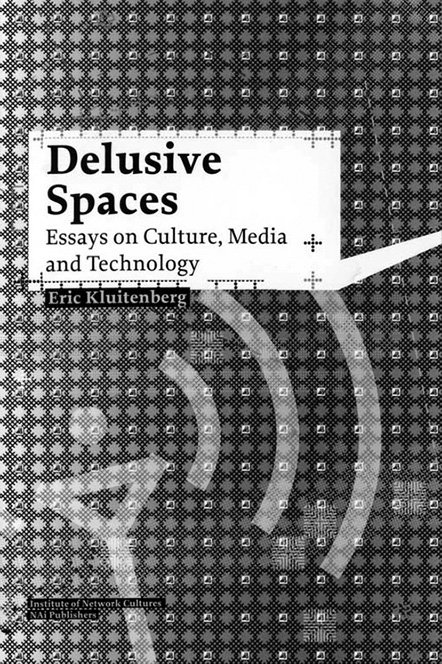 Delusive Spaces contains over 350 pages of articles by Eric Kluitenberg, written from 1994 to 2006. It is an impressive quantity of text, certainly when you consider that in a certain sense it is the by-product of more than ten years of work as an organizer, editor and teacher. Kluitenberg taught at one the first media programmes in the Netherlands (Media-GN in Groningen) and has since been a tireless organizer of events, debates and festivals in the field of media culture, initially often in Eastern Europe and now for several years at De Balie in Amsterdam. In this capacity he combines cultural, technological and sociopolitical themes. It is good that there is now a book that provides insight into the motivations of someone who, with his organizational efforts, is involved in shaping the debate in the Netherlands. It reveals his theoretical basis, it provides backgrounds and it also reveals his personal interests.

The texts in Delusive Spaces – which refers to the misleading spaces of the media – come from three ‘sources’, or, as Kluitenberg himself calls them, three analytical trajectories. First there are fairly long, historically tinged texts that form the ‘Archaeologies of the Machine’ chapter, in which, for instance, the way civilization was transformed by the establishment of clock time-keeping. In an extension of this, there is speculative media archeology, which examines the dreams new media lead to. There are remarkably frequent references to American technology historian Lewis Mumford, who provides Kluitenberg with a technological philosophy that considers the cultural, the historic and the technological in connection with one another.

The second part consists mainly of articles with a sociopolitical focus. They concern sociopolitical developments associated with the rise of the Internet and are mostly written in the context of one of the net culture events in which Kluitenberg has taken part. They analyse the new situation, call for activism, provide an outline of new forms of politics, identify the problems this produces or extrapolate and make a more controversial proposal. Here, for instance, we find the article about the ‘post-governmental condition’ that he wrote on the occasion of the last ‘Next5Minutes’ conference, but also his explanations of hybrid space and the right ‘not to be connected’ – part of Open no. 11, for which Kluitenberg served as guest editor.

Finally there are several essays that, according to Kluitenberg, concern ‘the presence of the unrepresentable as an experiential rift in contemporary culture and society’ (page 33). The unrepresentable here is a reference to Lyotard’s philosophy of the sublime. Of all the philosophers and theorists examined in Delusive Spaces, Lyotard seems to be the one that occupies Kluitenberg the longest. Through Lyotard he attempts to make clear that a place has to be ‘outside’ – ‘outside the media’, ‘outside the system’ – in order for criticism to be possible.

What connects the articles is that they consistently consider culture and technology, society and media, in connection with one another: technology is not just about ‘the calculable and predictable’ (page 69). In the introduction – the most recent text – Kluitenberg argues that theorists have to open the black box of technology. He emphasizes the necessity of hardware and software studies – a plea with which I whole-heartedly concur. In practice, in the older articles, he is still mostly opening the cultural black box: in the technocultural and the cultural-technological it is always culture that gets the attention.

A second thread is the emphasis on the link between the digital media space and non-digital reality. For this he develops the concept of hybrid space, which combines the flow of spaces or the space of flows. This is why he insists on an activist use of new media that is not limited to cyberspace.

The texts offer a retrospective of the evolution of the ‘media discourse’ over the last ten years. From the pre-World Wide Web days to the activist age of tactical media (when the Internet seemed to be turning into an alternative space to ‘the media’), to the current culture of always-having-to-be-connected and its dark side: the total data mining and continuous real-time tracking of data bodies and products as well as human bodies. In this regard Delusive Spaces also traces the transition from mass-media spectacle society in which power can be exercised through visibility in the media to a society in which everything is de facto visible and traceable. In this world, says Kluitenberg, ‘Power is vested ... not in the ability to connect and become visible, but in the ability to disconnect, to become invisible and untraceable, at will.’ (page 287) This is why Kluitenberg asserts that we have to defend the right not to be connected: as a form of resistance, in order to create a place from which criticism is possible.

While Kluitenberg’s concept of hybrid space is probably the most interesting, the right not to be connected provides the most food for thought. Yet I still find his article ‘Media Without an Audience’ the most appealing. It relies heavily on a long quotation from Adilkno’s theory of sovereign media, and it owes its method to Adilkno as well. When it was written in 2000, it made an issue of an avant-garde idea; it has since become an uncanny description of a media reality, in which everyone is a broadcaster and, if you’re lucky, only a few friends are still tuned in. Messages are no longer being sent out into the world; there is only an attempt to make contact. Or, as he says himself in ‘The Pleasure of the Medium’, ‘Self-mediation does not aim at communicating – at conveying a message – instead it tries to establish affective relationships.’ (page 283) He views this as an anthropological principle: it is an attempt to feel at home in an environment that is not naturally ours. It is passages like these, in which Kluitenberg encapsulates the apparent paradoxes of our media society in words, that make this collection worthwhile. The fact that the book also contains a lot of familiar work, perhaps too many summations of other people’s insights, and that as whole it is uneven, is something you’re happy to forgive.

Arie Altena writes about art, technology and new media. He is an editor / researcher at the V2_Archief in Rotterdam, teaches Interactive Media and Environments at the Frank Mohr Institute and is a co-organizer of Sonic Acts. In 2006 he conducted research at the Jan van Eyck Academie. His blog research project, In the Loop, is part of the Ubiscribe project, for which he also edited the POD book Pervasive Personal Participatory, Ubiscribe 0.9.0 (2006).

The philosopher Hannah Arendt defined public space as a place where people act to create a ‘communal world full of differences’. But where does this space manifest itself today, that generally accessible domain where people meet one another and create public opinion and hence a form of political practice? In physical places like streets, squares and parks? In mass media such as newspapers and television? Or on the Internet, in chat rooms and newsgroups? Publicness is increasingly enacted in all these places simultaneously and in that sense has become supremely ‘hybrid’ in nature: a complex of concrete and virtual qualities, of static and mobile domains, of public and private spheres, of global and local interests.

The configuration of hybrid space is currently experiencing a powerful impetus thanks to wireless and mobile technologies like GSM, GPS, Wi-Fi and RFID, which are making not only the physical and the virtual but also the private and the public run into each other more and more. And although we apparently deal with this flexibly in our daily lives, what is often left aside in debates on environmental planning or on social cohesion, or in cultural analyses, is the fact that the use of these wireless media is changing the constitution of public space. They can be deployed as new mechanisms of control, but also as alternative tools for enlarging and intensifying public activities – whether it’s a matter of parties, events or meetings, or of campaigns, riots and demonstrations. Wireless media make a ‘mobilization’ of public space possible, both literally and figuratively, so that it is no longer static and can be deployed by individuals or groups in new ways. Open 11 deals specifically with the implications that these mobile media have for public activities, and hence with the public dimensions of hybrid space. The issue has been produced in collaboration with guest editor Eric Kluitenberg, theorist, writer and organizer in the field of culture and technology. In his introductory essay he asks himself how a critical position is possible in a hybrid space that is characterized by invisible information technology. Together with Howard Rheingold, author of the renowned book Smart Mobs: The Next Social Revolution (2002), Kluitenberg has also written a polemical piece about the right and the ability to ‘disconnect’, that is to say, about not being connected with the ‘network of waves’ as a form of acting.

New wireless, mobile media and hybrid space are being used experimentally and reflected upon on a small scale by a select company of artists, designers, architects and urban designers. In her essay for Open, the sociologist and economist Saskia Sassen looks at ways that artistic practices can ‘create’ a type of public space within globalized network cities that can make visible the local and the silenced.

On the basis of their projects for the Ruhr region in Germany, architects Frans Vogelaar and Elisabeth Sikiaridi provide an account in Soft Urbanism of how urbanism and architecture can be combined with information and communication networks. The researchers of the design project Logo Parc critically analyse the ‘post-public’, hybrid South Axis area of Amsterdam and make proposals for experimental design strategies.

Assia Kraan writes about how ‘locative arts’ – art that makes use of location- and time-conscious media like GPS – can stimulate public acting in urban spaces. The Droombeek locative media project is discussed separately by Arie Altena. Max Bruinsma analyses OptionalTime by Susann Lekås and Joes Koppers. Klaas Kuitenbrouwer looks at the cultural and social possibilities of RFID. The artists / designers Kristina Andersen and Joanna Berzowska discuss the social possibilities of wearable technology in clothing.

Noortje Marres’s column reflects on the public’s (in)ability to act and the role the media plays in this. The German researcher Marion Hamm reports on the Critical Mass bicycle tour in London in 2005, a political demonstration against neoliberal globalization, which was experienced and prepared as much on the Internet, particularly by Indymedia, as in physical space.

The interview by Koen Brams and Dirk Pültau with the Flemish television maker Jef Cornelis is part of a larger research project at the Jan van Eyck Academy in Maastricht about his work and also provides the theme of Open 11 with a historical dimension. The conversation deals with the conditions of TV as a public medium and the changes in urban public space that Cornelis drew attention to in his early films such as Mens en Agglomeratie (1966) and De Straat (1972).

This issue of Open includes the CD-Rom Amsterdam REALTIME. Dagboek in sporen / Diary in Traces, a GPS project by the artist Esther Polak in collaboration with Jeroen Kee and the Waag Society. Made in 2002, it deals with mobility and space and has in the meantime become a classic point of reference within ‘locative arts’.

On the invitation of Open, the design and art collective De Geuzen has contributed Mobiel Werk, which is partly concealed in the cover.

In this article, media experts Howard Rheingold and Eric Kluiten­berg ask us to consider if unques­tioned connectivity – the drive to connect everything to everything, and everyone to everyone by means of electronic media – is necessarily a good thing. To stimulate ideas, the authors propose a possible alternative: a practice of ‘mindful disconnection’, or rather the ‘art of selective disconnectivity’.