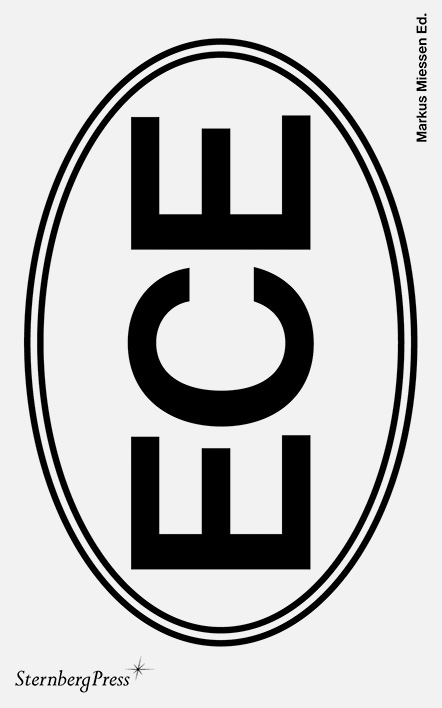 East Coast Europe, edited by Markus Miessen, is the product of the East Coast Europe project initiated by the Slovenian Consulate General in New York in connection with Slovenia’s Presidency of the Council of the European Union during the first half of 2008, the European Year of Intercultural Dialogue. The initiative was funded in part by the New York chapter of EUNIC, the network of European Union National Institutes for Culture founded in 2006.1 Alenka Suhadolnik, Slovenia’s Consulate General in New York, asked Katharine Carl and Srdjan Jovanović Weiss of the School of Missing Studies, which presents itself as a ‘network for experimental study of cities marked by or currently undergoing abrupt transition’,2 to organize the project. They, in turn, then brought on board the promising young German architect Markus Miessen, editor of the book The Violence of Participation.3

During one of the brainstorming sessions that inevitably accompany such transnational, transatlantic and public-private networking, someone must have come up with the cool expression ‘East Coast Europe’. While Europe is the book’s main subject of research, ‘East Coast’ refers to the two borders of this Europe: on the one hand the geographical East Coast of the USA, on the other hand the political ‘East Coast’ of the European Union. East Coast Europe has become an enquiry among political and cultural actors who view Europe from this or that ‘border’. A museum director in Philadelphia; an artist in Bucharest; a curator at the Whitney Museum of American Art; and a gallery owner in Pristina; each of them has to deal with Europe from the outside, albeit from two different sides. The tiresome thing about this method though, which is the logical result of what is ultimately a banal play on words, is that it brings together two completely heterogeneous groups of actors under one and the same denominator. The enquiry mainly takes the form of conversations that Markus Miessen had with various people about Europe’s borders; about the most important characteristics of the European Union; and about the perceptions of Europe.

Miessen’s interviews are not all the same standard. Some of them, like the conversation with Jordan Wolfson and Nedko Solakov, have an unbearable lightness, while others, like the one with Eda Cufer and the Slovenian artists’ collective IRWIN, provide a lot of interesting information, but look suspiciously like carefully written essays. Some of those interviewed meanwhile, like the British politician Paddy Ashdown and the Russian curator Viktor Misiano, are well aware of what they are talking about. For other interviewees, however, the point under discussion only seems to dawn on them during the course of the interview, but by then it’s too late.

A highly debatable assumption carried by this collection of interviews seems to be that all the artists, curators and architects who happen to be in your address book should by definition have something interesting to say about Europe, as long as they were born or are working in East Europe or live or work on the American East Coast. Greater selectivity, a bit more preliminary research to find voices that, like Ashdown’s and Misiano’s, can speak expertly and knowledgably, would not have been amiss. Furthermore, it is a pity that many of the interviews evince a complete absence of any reference to the existing, many-voiced discourse about Europe, whether it’s a question of an opinion of philosophers such as Derrida, Habermas or Sloterdijk, or of the position of prominent politicians like Delors, Prodi or Verhofstadt. Such a marked omission suggests the book’s editor must have had a premise that West European opinions should not be included, not even in the most indirect sense, if only to permit ‘the other’ to have a say.

The Slovenian philosopher and cultural theorist Mladen Dolar supplies an excellent introduction to the book with his essay ‘Kafka’s Europe’; while the academic and writer Genevieve Maitland Hudson, and the Ankara-based architect, artist, designer and scholar Can Altay provide contributions of their own. Contained in one of the book’s appendices is a conversation between Katharine Carl and Srdjan Jovanović Weiss with the Bosnian-American artist Nebojša Šerić Shoba. The book also includes a reprint of an interview that the curator Hans Ulrich Obrist once conducted with the French historian Jacques Le Goff in connection with another project in January 2005.4 If the intention of this reprint as appendix was to rectify the lack of West European voices in the main texts, then I would have to register a protest against what is in fact the quasi-monopoly on West European opinions that this visceral anti-Turkish historian is momentarily allotted here. That dated interview looked at then-current political events, and the lack of any editorial commentary on the reprint of the interview leads to serious confusion. In 2005 Le Goff was rejoicing in the ‘recent decision of the European Commission’ not to allow Croatia to join the European Union, while in the course of 2008 the European Commission – through both the President of the European Commission, José Manuel Barroso, and the member of the European Commission responsible for enlargement, OIli Rehn – had repeatedly offered Croatia the prospect of membership in 2011 (page 298). The technical negotiations, it was even said, could be completed in 2009. Seeing as East Coast Europe is an initiative of the Slovenian presidency, one cannot help but wonder whether the reprint of this old interview without any commentary is an innocent editorial slip or a sly dig at Slovenia’s Balkan neighbour. If only to preventively quell a political furore, I suspect that ultimately it is nothing more than a question of a little ‘gesture’ by Markus Miessen towards his fellow interview specialist – and boss – Hans Ulrich Obrist.

Dieter Lesage (Belgium) is a philosopher and lecturer at the Department of Audiovisual and Performing Arts (RITS) of the Erasmushogeschool in Brussels. His most recent book is Vertoog over verzet. Politiek in tijden van globalisering [Discourse on Resistance. Politics in Times of Globalisation] (Amsterdam-Antwerp: Meulenhoff-Manteau, 2004).