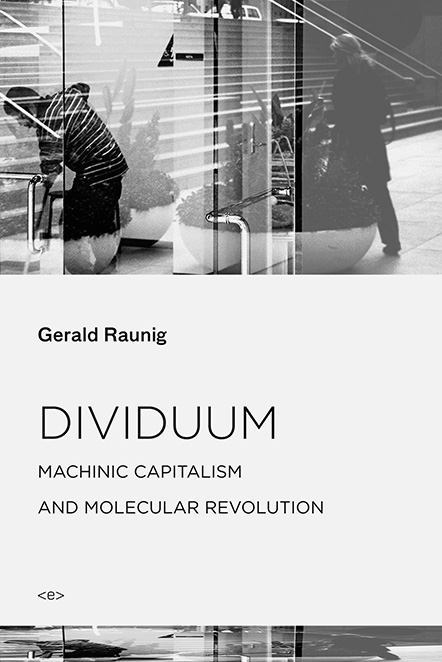 Is the individual dead? Academic, philosopher and art theorist Gerald Raunig certainly got his knives out as he seems to have left the category behind in his seventh book Dividuum: Machinic Capitalism and Molecular Revolution, Vol. 1. Here he follows the conceptual and historical line of the ‘dividual’ as objectified within machinic capitalism, while underscoring the new potential of resistance this positioning offers.1

According to Raunig, the beginnings of the term dividuum can be credited to the philosopher and theologian Gilbert de Poitiers (approx. 1070–1154) who was the first to differentiate between singularity, individual and person. He proposed a singularity that is not individual, not understood as wholeness or entity, dissimilarity or distinction. This singularity enfolds the individual, but it can be more or less than that. In fact this concept of singularity is not understood as an individual but a dividual quality.

A dividual and therefore not individual singularity is, according to Raunig, able to chain itself to similar singularities due to components of similarity. This concept of chaining opens up possibilites for assemblages of ‘Co-Formity’ to become ‘Multi-Formity’ or ‘Form-Plurality.’ Dividuality thought as divisibility and division never points toward wholeness – dividuality is always conceived as dispersion.

A further formative moment in the history of the dividual is marked by Friedrich Nietzsche’s book Human, All Too Human: A Book for Free Spirits from 1878, in which he unmasks Christian morality as the origin point for the unification of manifold moral sensations. While producing an indivisible individual, morality constantly demands self-division from this individual. This form of immolation of parts of the individual is not necessarily altruistic, as it also appears for thouroughly selfish reasons. The act of confession for example, this act of impartation, is not simply a way to repent but a possibility for self-aggrandizement. This form of self-division is at the same time inflicted and driven by a selfish desire. The ambiguous act of unification and division reveals two modes of repression: a grinding subjection and a voluntary constitution of the self to be a normative moral subject.

Referring to Michel Foucault’s concept of pastoral power, Raunig puts forward the argument that in addition to the subjugation to ‘a moral state apparatus’ there is a ‘machinic subservience’ that effuses ‘the self-governing service of social and technical machines.’

Raunig’s concept of machinic capitalism does not simply describe basic modifications of capitalism, but the inherent increased prominence of the machinic in capitalism – data streams and flows traversing various single things. It’s not the persistent picture of the subjugation of mankind under the mighty machine that is central here, but certain forms of machinic self-government: the self-arrangement of things into an assembly. This two-dimensional movement is particularly redolent of the omnipresent Facebook as well as in the specific operating mode of search engines. It is revealed in the voluntary production and output of data, following a desire to impart and partition the self: a desire to participate in virtual sociality through confession. Sharing glimpses of the self correlates with the constitution of the self as a specific subject, a subject that is not an individual but the result of detached information and data of what can be known from the ‘self.’ Paradoxically it’s the claim to present oneself as an identifyable individual, as a wholeness, that motivates self-division. That private data is coming to value is carried by all protagonists involved: the line between producers and consumers is becoming more and more obsolete. While each protagonist is part of a network that demands impartation about the self permanently the demand is only sustainable because of the voluntary production of private data.

Knowing Raunig’s philosophical background, that he would look to Gilles Deleuze and Félix Guattari’s A Thousand Plateaus (1980) in which they describe a form of individualization not by persons but by affects, seems virtually inevitable in this new book. Deleuze and Guattari develop a different form of individualization of the masses than one that simply tends to the individuality of a subject. This form of individualization corresponds with Raunig’s dividual singularities which are not in opposition to universality but inherent in the masses in variable intensities. Just over ten years after the release of A Thousand Plateaus Deleuze shows the dark impact of this mode of individualization in his well-noted essay ‘Postscript on the Societies of Control’ (1992) in which he states that the control-society-(in-)dividual is dispersible. It is evaluated through tastes, habbits or affects. The commercial appropriation of data streams to the point of becoming ‘Big-Data-Knowledge-Complexes’ is connected to a specific form of outsourcing production processes – consumers are being activated as compliant workers. The value produced devalues wage labour all the more. It’s the voluntary exposure of affects and the samples which can be taken from this information that draw dividual lines and produce the substance of ‘Big-Data-Knowledge-Complexes.’ Their value-adding protagonists are not individuals but the flexible dividual lines.

This is not only the case for social networking or work online. Raunig also refers to this kind of productivity as working on, in and along a line. Not simply the product but the correlation between production and consumption is in the spotlight here. Permanent recalculation and the use of algorithms enable speculations along the line. It isn’t the product’s value that counts but the speculation within the line itself. ‘Metrics replaces measurement, the algorithm relies on a new relative, derived, derivative, metrical measurement that measures efficiency only to speculate with it,’ Raunig writes.

He is referring to nothing less than the derivate, the prototype of a speculative financial instrument: its value is derived from the value of other products; it is existing in a permanent, hyper-complex process of bundling and division guided by technical and social machines. Within this relation of constitution and dismantlement, of plainness and the incalculability of a product, Raunig locates the exact logic of the dividual: as the traversing of components on levels which can be larger, smaller, more or less than the individual. Even with affects one can speculate.

Yet how do we take action against a capitalistic system in and from which we all exist? Or as Raunig puts it: ‘How will, in machinic capitalism, the middle become newly noncompliant?’ Wherever desires take forms which are not identifiable, wherever they form as assemblages of similarity, not as closed formations but as manifold and impalpable interruptions there is a ground for this new noncompliance. While many saw the Occupy movement’s rejection to make clear demands as its weakness it was exactly this noncompliance and the affirmation of similarity but not sameness that constituted its power.

Especially in a derivative form, in the interplay of division, bundling and unpredictability there could be a process becoming visible. Raunig refers to it as a new form of dividual and ultimately molecular organization, a molecular revolution is possible: a revolution without subjects, but with singularities ‘whose’ primacy is manifold. A revolution against unification, measuring and striation, and therefore against machinic subservience and its commodification. The also eponymous term ‘molecular’ is again taken from Deleuze and Guattari and implemented by Raunig as deeply connected to his concept of the dividual motion. Molecular, that is not the opposite, but the antidote to the ‘molar’: molar thought as stiffness, a mode of being in the controlled/controlling channels of normalization.2

In Dividuum Raunig silently dares to offer – besides his original analysis of capitalistic mechanisms – a specific translation of the Deleuzian and Guattarian concepts of the line of flight/vanishing line and the process of becoming. He thereby succeeds in the balancing act of making those concepts accessible as strategies without taking away their potentials. He is not simply continuing or updating but extending and opening them. He describes the unnameable without giving it away to identifiability.

Even though some of the lines Raunig drafts are difficult to understand, he has created very strong concepts and thinking-categories by his research and interpretation work. As a reader you start wondering why the hell the concept of the dividual, a concept that Raunig presents in a fresh and productive manner, has been in the shadow of the individual for such a long time. To think as oneself in categories of the dividual might be scary at first but it then starts to open up a whole new dimension of possibilities: of being, becoming, unlikely associations and ultimately of forms of resistance. The intermediate chapters ‘Ritornello 1–9’ – short quasi-literary, monological interludes – could be, considering the substance, wilder and much more ecstatic, but they still strengthen the political-aesthetic intensity shown by the theoretical parts. Their titling and form is again to be read as a reference to Deleuze and Guattari. Ritornello, a term that comes originally from music, is in its simplest definition a recurring passage in a composition. In Deleuze and Guattari’s philosophy the ritornello is once more strongly connected to moments in the concept of present becoming. In A Thousand Plateaus Deleuze and Guattari describe ‘ritornello’ as one thing that encloses three aspects: 1) the urge to constitute a territory, when there is the need for the fixation of a point in the centre when ‘chaos’ is a ‘big black hole’; 2) the moment when this chaos became ‘home,’ when the territory around the centre calmed down or became a mode of conduct in some way; and 3) the movement out of the situation, out of the newly constituted territory or out of the black hole.

With this in mind it’s very likely to enjoy Raunig’s ‘Ritornellos 1–9’ all the more. At the same time it is an ambitious venture to transfer the movement of deterritorialization and territorialization, the drawing of lines of flight, into concrete language and content – a venture that still seems to open up other possibilities in all directions. The mighty storm amid the chaos might be perceptible, the movement of flight palpable, but one might also hope for more delightful and audible raging when Raunig continues this dare in his second volume of Dividuum. That said the dividual, once imagined and felt in its challenging components, is something you simply can’t leave behind.

1. This English translation will appear in March 2016. For the original German language version and a free download see transversal.

2. . Molecular, however, means a nonlinear presently becoming inside a rapid middle of potentialities. Or, as Deleuze and Guattari indicate in A Thousand Plateaus, an exciting deterritorialization by becoming an animal, a child, a mineral or imperceptible on a molecular layer. For Raunig’s conception of molecular organization and revolution this means that the chaining, the bundling and division, the assemblage of singularities, of similarites or affects needs to be on this level. Drawing a vanishing line or a line of flight (again thanks to Deleuze and Guattari for this) is above all a movement of deterritorialization. This drawing is a movement away from the normative molar level. It is done to make the shift from denying possible forms of being, to affirming forms of becoming.

Stephanie Danner (1987, Austria) is a writer, theorist and artist living and working in Switzerland.

General
Factories of Knowledge, Industries of Creativity
Commonist Aesthetics
From Community to the Undercommons
Open no. 14, General
A Thousand Machines: A Concise Philosophy of the Machine as Social Movement
Open no. 23, Autonomy
Re-Territorialize!