How Big is Your Monograph? 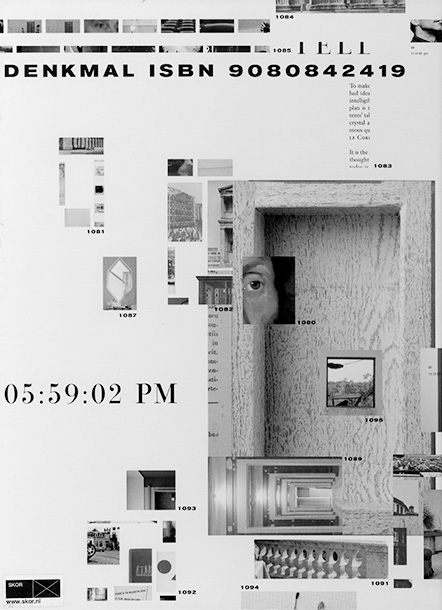 Size matters: it would be absurd to maintain that the dimensions of catalogues and other books devo­ted to artists are irrelevant. The books usually get bigger as an artist gets older and his or her career proceeds successfully; the kids have to make do with less. The self-published work Denkmal ISBN 9080842419 by Jan De Cock is therefore something of a provocation: three sections, of which one is very thick, in a sturdy box. The whole thing is about the size of a phonebook. For an artist his age this is remarkable, but it is not an isolated phenomenon: Jan De Cock’s whole practice as an installation artist is expansive. His geometric yet densely packed, at times almost Escherian constructions of chipboard and timber (with such titles as Randschade (‘Collateral Damage’) and Denkmal have engendered a kind of doubling and fragmentation of the exhibition space in many an art institution. What this expansive nature of De Cock’s work ultimately signifies, what its artistic gains are, remains to be seen.

Aside from a section of large colour photos of De Cock’s installation (Denkmal 9) in the library of the University of Ghent, the publication consists of a thick section of illustrations of De Cock’s own work and pictures the size of postage stamps, arranged in ­‘modules’, which serve as reference material, as well as English translations of essays by various authors. A notably thinner section contains the Dutch versions of these texts and the same pictorial material, but in black and white and often smaller. Not just the format but the authors underscore De Cock’s ambition: Luk Lambrecht seems to be here less as a critic than as an exhibition curator who has given De Cock commissions, while Wouter Davidts and Marc De Kesel serve to provide substantive depth and Chris Dercon more or less connects the two sides (curatorship and analysis). Both Dercon and Lambrecht mention their experiences with De Cock (‘I first met Jan De Cock when he was working as an assistant came­raman’), while Davidts and De Kesel opt for a more detached analysis.

In his text, Dercon threads together Derconian references that mainly revolve around ‘Cinema’: Deleuze, Straub / Huillet, Badiou, Damisch. His suggestion that De Cock has ideas that are ‘like films’, and that the large cibrachrome slides in light boxes on which De Cock records his installations can be related to the ‘image-temps’ of the nouvelle vague (in which movement is made subordinate to the direct experience of time), remains rather vague and therefore facile. In the clusters of small pictures De Cock has included various film references, particularly a lot of Godard, but whether and to what extent it makes sense to analyse his installations in cinematic terms remains a question after reading Dercon’s text. Whereas one can assume that the film references in De Cock’s pictorial material come from a long fascination on the artist’s part, the inclusion of Giotto paintings seems rather a short-term decision based on Marc De Kesel’s essay: De Kesel places De Cock’s work within the history of the Western representational ­paradigm that began to manifest itself with Giotto. Before that the image was an icon intended to take the viewer away from earthly reality, toward God. With the Renaissance, art became the ­representation of earthly reality, in which God was incarnated as Christ. Eventually this produced a completely secular representation space; when only visible presences can be re-presented, there is no place left for the divine. De Kesel’s argument is largely identical to an earlier text, a lecture he once gave, but now he places De Cock’s work against this backdrop. In the process, he uses historical terms in a rather elastic manner: the space of representation is suddenly labelled ‘modernist’, and this is effortlessly linked to the ­‘modernist’ forms De Cock uses in his installations. But modernism in the stricter sense of the term was often critical toward repre­sentation, and aimed to replace representation with the presence of pure colour and form. One can question whether this attempt ­succeeded and whether moder­nism did not in fact remain trapped in the representational paradigm, but De Kesel bypasses this issue entirely.

Wouter Davidts, in a text that is brilliant but ultimately not always convincing, focuses particu­larly on the Denkmal that De Cock exhibited at Victor Horta’s Palais des Beaux-Arts (now Bozar) in Brussels for the Prix de la Jeune Peinture Belge: a sort of abstract model of the building’s central hall, the so-called ‘Sculpture Hall’. Davidts uses this work to analyse the relationship between Marcel Broodthaers and De Cock and to polemicize against contemporary neo-avant-gardists who wish to erase the line between art and life or between art and politics. Scornfully Davidts recalls how after 1968 the central hall was transformed into a cosy, multi-functional ‘animation hall’, and how Broodthaers always resisted this sort of attempt at livening up and humanizing the museum space. Broodthaers was sceptical about attempts to reconcile and merge art and life, and Davidts is right in criticizing their present-day equivalents. He also takes aim at artists who too easily base their work on a clear-cut message and use art and the museum as substitutes for activism. This has devalued the museum ‘and turned it into a kind of “sheltered workshop”, the only place where well-intentioned and subversive “social proposals” can be put forward.’ In response to this one could argue that while the content-focused po­liticos and social workers neglect the artistic context and merely use it pragmatically in order to propagate their message, De Cock’s work betrays a fetishist fixation on that context, which is just as much of an impoverishment in relation to Broodthaers. Broodthaers ­recognized that the museum was a place of alienation, displacement, re-presentation, and that art cannot be subsumed in ‘life’, but that does not mean that he was completely fixated on the museum and isolated it from the rest of society. In Davidts’s interpretation Broodthaers the dialectician is reduced to an acquiescent citizen.

De Kesel also polemicizes against content-fixated political art, and argues that representation is now the business of visual culture, while art, within the overwhelming visibility of this visual culture, should in fact be showing the invisible. This is no longer God, who used to be the support for representation, but rather ‘the frame of what is visible’. Art must ‘fold the representation in on itself’, the way a painted angel does in Giotto’s Last Judgment in Padua. But must this, in contemporary art, really take the form of a virtuoso play with the container of the museum? Might it not also lead to working with concrete ­representations, by which the work might even – the horror – acquire a political dimension, however indirect and ineffectual? This certainly applied to Broodthaers and his poetic analysis of the ideology of the eagle in art and visual culture. Whereas Broodthaers and others of his generation (Smithson, Buren, Haacke) elaborated the dialectic between artistic space and the ‘outside world’ – for example the relationship between the museum and advertising, between artistic place and urban space, between museum trustees and their business interests – De Cock focuses much more exclusively on the museum space. This space is abstracted, mirrored, fragmented, yet he seldom directs his gaze – as Broodthaers did with his meta-museum – on the representational aspect of the museum. Jan Vercruysse and kindred artists from the 1980s actually seem to me to form the true (repressed) model for De Cock’s work. They too made rarefied meta-representations of the museum container, albeit with an emphatic melancholy that has been exchanged in De Cock’s work for an unrestrained use of the more utopian moments of modern art – which are, however, employed in a museological fashion, stripped of their rough political edges. The photo series Temps mort is nevertheless interesting, showing mainly deserted, monumental places in Eastern Europe. Integrating such images into the installations might – as with Günther Förg in the 1980s – open up the work on to other contexts.

Perhaps De Cock’s work is indeed a necessary counterpoint to artists who emphasize content in a naive way, but it is merely the other side of the coin – that is to say, equally one-sided. It focuses on the art world as an ultimately unstable, empty place without foundations, in which representations have to turn in upon themselves, but leaves it at that. Working with the void in the heart of the representation turns into a complacent – albeit virtuoso – representation of the void. This void is then mass-produced and increasingly blown out of proportion, as an expansive marginal note on the state of art in the McGuggenheim era. It is at the very least an interesting spectacle, compellingly staged in this book – but perhaps it is not much more than that.

Sven Lütticken is a member of the editorial board of Open! Platform for Art, Culture & the Public Domain. He teaches art history at VU University Amsterdam; is the author of several books, including History in Motion: Time in the Age of the Moving Image (2013); and writes regularly for journals and magazines including New Left Review, Afterall, Grey Room, Mute and e-flux journal. At the moment he is working on a collection of a essays under the working title 'Permanent Cultural Revolution,' and editing a reader on art and autonomy. See further: www.svenlutticken.org.