From Medieval to Global Assemblages 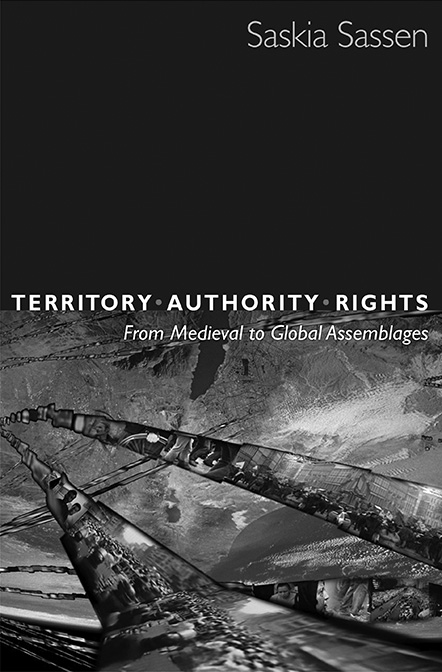 The American sociologist Saskia Sassen became known because of her insights into the shady world of financial computer networks that brought about a genuine revolution in the mid-1980s by linking stock exchanges to each other in real-time. Sassen’s book The Global City, about New York, London and Tokyo, has in the meantime become a classic, with a new edition appearing a few years ago. In addition to studying metropolitan nodes, she devoted attention to the position of migrants and minorities, social movements, the role of the Internet and the emergence of international organizations like NGOs. What makes Sassen special is her engaged, multidisciplinary approach. Even though the material she is dealing with is dry and abstract, she always succeeds in engaging and sweeping along her readers. ‘Complex’ is a fashionable word that is generally used to conceal the fact that one doesn’t really understand much, but this does not apply to Saskia Sassen. For her, complexity is a challenge and a compliment. When an analysis is complex then knowledge has been gained and we have acquired a deeper insight into large-scale social and political processes.

Sassen eschews the use of jargon and cannot easily be assigned to this or that school of theory. The name of Manuel Castells quickly comes to mind, but he is too much of a non-specialist and one is left guessing at the political import of his network society. What Sassen does share with Castells is her global perspective. Although both teach at American universities they have lived and worked in many places in the world. Another comparison could be made with Negri & Hardt’s Empire, but this falls short because of the growing gulf between philosophy and sociology. Sassen’s references to philosophy are limited to a footnote about Deleuze & Guattari’s concept of assemblage. What hinders a potential dialogue between the two fields of study is the specific language that Sassen borrows from the institutional knowledge from which she draws. Whereas Hardt & Negri focus on the vitality of the ‘multitude’, Sassen concerns herself with the tedious triviality of the office, the meeting and the computer screen. Although Sassen traditionally devotes a lot of attention to neighbourhood organizations, NGOs and ‘global civil society’, she is not dreaming of a revolution. With great suppleness, Sassen reveals the proximity of institutional power, a level that many of us drop out of us because it is deemed impenetrable.

Territory-Authority-Rights or, as Saskia Sassen herself terms it, TAR, can be read as her magnum opus. Whether it is Sassen’s best book is a moot point. The aim of this ambitious work is to show how the power of the nation-state is shifting to the global level, without describing this process in terms of the loss or end of the state. She does this by means of conceptualizations rather than case studies. What Saskia Sassen is concerned with is to develop a theoretical framework in which globalization is seen as a complex historical process that establishes itself at the local and national level. The government is not regarded as the enemy or an accomplice, but precisely as a vehicle. The emphasis she lays on the national level is a pragmatic rather than principled choice. Her work from the 1990s concentrated on the local level of the big city. Now it’s the turn of the political level of the state. As an intellectual exercise, TAR makes for tough reading and thinking, for the very reason that Sassen runs counter to the simplistic metaphors of people like Thomas Friedman, who reverts to the medieval picture of a flat world. Sassen abandons the surface and demands of her readers that they should enter the depths with her. She does not claim that the state is superior nor does she disregard globalism, even though, after 9 / 11, there’s a lot to be said for this. Sassen parries the idea that supranational organs are drawing more power to themselves over the centuries and eroding governments with the notion that globalization actually manifests itself in and as the state. Internationalization simply makes the nation-state even stronger. The global beast does not suck the state empty but entrenches itself in it and builds on successful governmental structures. This notion has important consequences, particularly for the strategy of social movements; it is not wise to dismiss the nation-state or to see it purely as a defensive shield against wrongdoers from foreign countries.

It is sometimes said that Sassen disposes of globalization as an ideology and that the discourse of globalization can be deconstructed, but nothing is less true. The changes that have taken place since the 1960s, particularly in the area of financial services and world trade, are only too real. It goes without saying that nothing is virtual. The shifting of sovereignty towards closed organs like the WTO and the EU is all too tangible. What has changed since the 1980s is the extent of the depth of the ‘worldwide scale’ on which globalization works, and not the worldwide scale as such. It is thus not enough to dispose of globalization as though it had always existed or that it amounts to nothing. The struggle that is now flaring up has to do with concrete issues like the relationship between the private and the public, who can call himself a citizen of a particular state and where the boundaries of so-called global venture capital lie.

Without parading herself as a visionary or utopian, Sassen does wonder in TAR what citizenship could then mean if, at the national level, it has lost its legitimacy. What she envisages is a ‘denationalized’ state that anticipates and not only reacts. It is not the global state that is going to save us from the unbridled power of big businesses and aggressive regimes like those of Milosevic and Bush. The crucial issue is how ‘citizens’ will start to organize themselves on a global scale. Banks and multinationals have already done this, governments have their own organs, and now it is the turn of the people to organize themselves. Clearly, this should not be via the classical forms of political parties or trade unions. With the rise of (international) NGOs and the Internet, new political formations are revealing themselves, which Saskia Sassen neither extols nor denigrates. What this ‘theorist of the second phase’ does do is to think through the integration of all these new global facts. We have gone beyond the first phase of hype and critique; what now matters is the tough work still to be done. That is the lesson that many new social movements have learnt in their campaigns and which Saskia Sassen reflects upon in her own inimitable way.

Geert Lovink is a media theorist, Internet critic and author of Social Media Abyss (2016), Networks Without a Cause (2012), Zero Comments (2007) and Dark Fiber (2002). Since 2004 he is researcher in the Faculty of Digital Media and Creative Industries at the Amsterdam University of Applied Sciences where he is the founder of the Institute of Network Cultures. His centre recently organized conferences, publications and research networks such as Video Vortex (the politics and aesthetics of online video), Unlike Us (alternatives in social media), Critical Point of View (Wikipedia), Society of the Query (the culture of search), MoneyLab (Internet-based revenue models in the arts) and a project on the future of art criticism. From 2004–2013 he was also associate professor in Media Studies (new media), University of Amsterdam. Since 2009 he is professor at the European Graduate School (Saas-Fee / Malta) where he supervises PhD students.