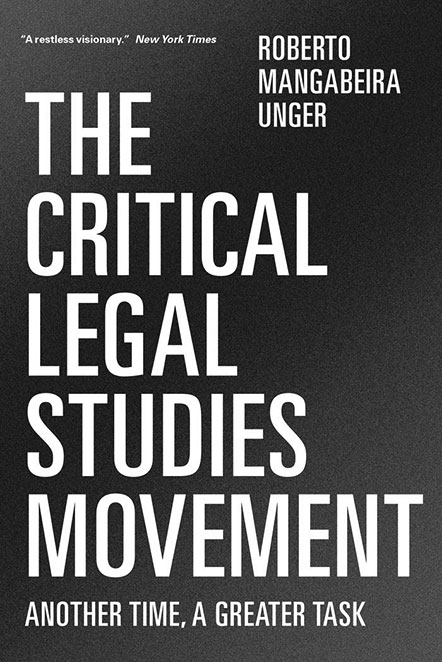 Critical Legal Studies (CLS) is a network of leftist legal scholars hostile to American political ideology and liberal political theory that traces its beginnings to the ‘Conference on Critical Legal Studies’ at the University of Wisconsin in 1977.1 The movement has since seen many derivations. One of its main figures, legal scholar Duncan Kennedy, conceives CLS as both a network of leftist activists and as a branch of scholarly literature, arguing: ‘… critical legal studies has two aspects. It’s a scholarly literature and it has also been a network of people who were thinking of themselves as activists in law school politics. Initially, the scholarly literature was produced by the same people who were doing law school activism. Critical legal studies is not a theory. It’s basically this literature produced by this network of people.’2 Political and legal theorist Roberto Mangabeira Unger notes that while the movement ‘continued as an organizing force only until the late 1980s, … its founders never meant it to become an ongoing school of thought or genre of writing.’ He delves further into the movement’s activist role in this book-length revision of his long, seminal 1983 article, ‘The Critical Legal Studies Movement.’ Interesting for Unger’s followers, this new edition is accompanied by an extended discussion on the potential of law and legal thought to inform the self-construction of society under our current democracy. Put differently, Unger proposes a shaping of society based on a vision of human personality devoid of the hidden interests and class domination, which, for the CLS movement, are the pillars sustaining liberal legal institutions in the West.

Initiated by a conscientious group of legal scholars involved in civil rights and feminist movements, Vietnam protests, and the political and cultural challenges that characterized the 1970s, the CLS movement sought to disrupt the general understanding of legal thought and law analyses. How could law be used as a tool for social change instead of a game that favours the wealthy and powerful? The point, for Unger, ‘is not simply to live the moment that history has assigned to us; it is to get off this treadmill by mastering the structure, practically as well as intellectually.’ For him, ‘under the conditions of dictatorship of no alternatives now prevailing in the world,’ legal thought vocation must become a practice of institutional imagination, engaging, ‘through the details of law, the regime of society as it is and exploring what we can and should turn it into next.’ Society is to be made and imagined rather than considered a given.

After passing through the overwhelmingly technical legal terminology that constitutes the first pages of the book, a careful reader can start to glimpse two main themes: an explicit critique of traditional analyses of law as well as a series of provocative arguments against current practices of democracy. In that sense, Unger presents his idea of an empowered democracy through a set of more concrete institutional examples by identifying the obstacles: first, in the arrangements of democratic politics; second, in the institutions of the economy; and third, in the regime of rights. Concerning the arrangements of democratic politics, for example, Unger emphasizes how ‘every attempt to revise the institutional arrangements that exercise […] structure-preserving influence seems to undermine the restraints upon government power that secure freedom.’ With respect to institutions of the economy, he states that the established economic order also poses a large-scale threat to democracy, ‘allowing relatively small groups […] to have a decisive say over the conditions of collective prosperity or impoverishment. […] [I]t jeopardizes freedom […].’ And finally Unger argues how in its present form, the regime of rights causes two main problems for empowered democracy: the system of property rights, and the current set of political and civic rights and welfare entitlements. He observes that the established order of rights is absent of legal principles and entitlements capable of informing communal life. In his eyes, neither the making nor the finding of law is neutral. Law has functioned to legitimize false ideolologies and maintain an oppressive political order.

After a brief exposition of the problematic in the arrangements of democratic politics, Unger posits the urgent necessity of a radical reconstruction of the state and the institutional structures in society maintaining: ‘[T]he guiding and unifying aim of the cultural-revolutionary practice I have in mind is to remake all direct personal connections, such as those between superiors and subordinates or between men and women, by emancipating them from a background plan of social division and hierarchy.’ This reinvention of democracy would hence be assured by the weakening of social division and hierarchy, and by the creation of structures of social life that facilitate their own revision. That is, ‘the building of a social world less alien to a self that can always violate the generative rules of its own mental or social constructs, and put other rules and other constructs in its place.’ A suggestion that does not imply permanent instability, but rather the making of structures that turn ‘the occasions for their reproduction into opportunities for their correction.’ An institutional structure itself self-revisiting, ‘that would provide constant occasions to disrupt any fixed structure of power and coordination in social life.’

To this end, Unger offers a strategy based on the genre of legal writing that began to develop in CLS during the late 1970s: the ‘deviationist doctrine.’ Although he is not explicit about what this doctrine amounts to, the crucial feature of this constructive program, ‘is the willingness to recognize and develop the disharmonies of the law: the conflicts between principles and counterprinciples that can be found in any body of law. Deviationist doctrine does this by finding in these disharmonies the elements of broader contests among prescriptive conceptions of society.’ Further, he specifies that the deviationist doctrine might follow two specific methods. The first is the ‘Method of Internal Development,’ which focuses on the social ideals underlying the legal system as it is yet seeks to transform it from within in order to arrive at a new practical embodiment. The second is the ‘Method of Visionary Insight,’ which incites a reordering of society and considered in comparison to the present legal system – ‘visionary insight into a reordered social world.’ In other words, what these two methods stand for are the formation of the conditions for a society based on genuine equality by eliminating hierarchies of economic, social, political and legal power.3

Following this vehement treatment of the CLS movement as transformative action, the reader might feel left in a vacuum without a seemingly practical conclusion. Unger’s thoughts transit intriguingly through different disciplines such as sociology, legal theory, and philosophy, and his writing is at times highly inspiring. Yet when it comes to how his ‘superliberalism’ will be put into practice, he argues that, ‘it would be a mistake to suppose that we need carry out this program for government, the economy, and the regime of rights either in its entirety or not at all.’ Here indeed, Unger is aware that the contrast between the scope of his theoretical concerns and the relatively limited domain in which it is pursued is something that cannot be obviated. What the reader is given is therefore a theoretical will to salvage the traditions of objectivism and formalism that yet brings to the forefront an interesting understanding of politics as an activity of struggle among fragmentary interest groups and parties of opinion. A democratic experimentalism, or ‘experimental democracy,’ whose strategy recalls that of Ernseto Laclau and Chantal Mouffle articulated in their book Hegemony and Socialist Strategy: Towards a Radical Democratic Politics (1985), based on freedom, equality and difference. Namely, democracy as ‘agonistic pluralism.’ A proposal to take advantage of the highly segmented character of social life and the awareness of its possible transformativity through the potential of law and legal thought.

Unger’s radical reform encourages us to understand society as something to be made and imagined rather than given. It is a proposal for radical reform that, in its transformative sense, includes changing the formative structure of institutions and their beliefs – something which necessitates constant theorizing and praxis. It is a programmatic vision that aims to make social life permanently more hospitable to transformative activity. And putting this into action is already a mode of empowerment.

1. Liberal political theory first became a distinct political movement during the Age of Enlightenment. It emphasizes individual autonomy and grants equal status to various viewpoints and lifestyles. The rule of law serves the function of protecting the exercise of private rights from interference by other individuals and by government. Those hostile to liberalism, such as the members of the CLS movement, ‘argue that Liberalism requires judicial decisions that transcend individual preferences in order to preserve pluralism, so fairness can only be guaranteed by decisions, based upon objective criteria.’ David Michael Fried, ‘Reviewing the Reviews: The Political Implications of Critical Legal Studies,’ Berkeley Journal of Employment & Labor Law 10, no. 4 (January 1989): 533, scholarship.law.berkeley.edu.

Lara Garcia Diaz is an independent art researcher. Her work focuses on the analyses of practices that challenge the boundaries between art and politics, considering alternative modes of empowerment through radical theories and practices of cultural resistance. Since 2014, she collaborates as an assistant researcher at the Van Abbemuseum, Eindhoven where she formalized her research on Urban Utopias and Spanish modern architecture in one of the rooms of the exhibition Confessions of the Imperfect. 1848 – 1989 – Today (2014–2015). Since 2015 she is extending her research on institutional contexts in collaboration with the Research Centre for Arts in Society, Groningen.