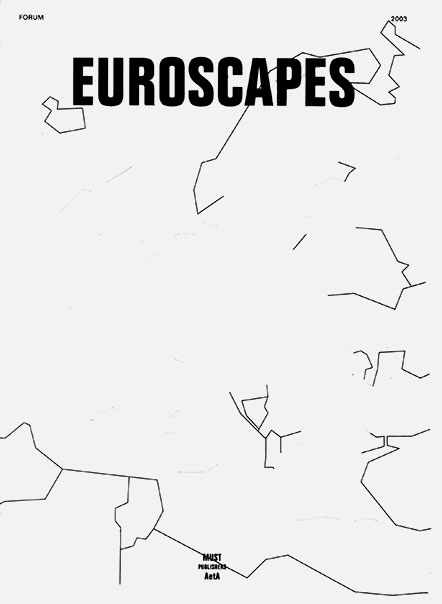 The architecture periodical Forum takes both friend and foe by ­surprise whenever it rises like a Phoenix from the ashes – yet again. Forum – for those not in the know – is the darling of the Genootschap Architectura et Amicitia, AetA, a Dutch society for architecture professionals. This wonderful company of hard-working architects who hold their profession dear is, as publisher and financier, responsible for the ­continuation of – to put it mildly – the inimitable life of this periodical. The formula is as simple as it is brilliant, even though it is also mildly disastrous for any continuity. Bring together a young editorial team, entrust the publication to it – members of the AetA have no time for it themselves, after all – allow the whole thing to get out of hand financially, put a stop to it – briefly – and then re-boot: try again, but with yet another new editorial team.

Forum has become world-renowned for this, though that was a while back already, namely with the editorial team of Bakema, Boon, Van Eyck, Hertzberger and Schrofer that was assembled by Dick Apon. The two most recent editorial teams were idealists of similar stature, with equally radical designers at the helm (Roelof Mulder and Jop van Bennekom), but this time it has resulted in the publication of a handsome cahier with the slightly hip title ‘Euroscapes’. To get straight down to the nitty-gritty: that slight hipness is also where the problem lies. The theme – the landscape of the new Europe – hits the bull’s-eye, but its elaboration is exasperatingly safe and respectable, while the subject calls for old-fashioned, critically paranoid analyses and the glowing exposé of blood-curdling prospects (read the ‘Hollocore’ chapter in Koolhaas’s Content).

The editing of Euroscapes was in the hands of Robert Broesi and Wouter Veldhuis of the MUST bureau, complemented by colleague designers and researchers. Six essays bring together what the editors consider the most urgent or fascinating dimensions of this new European landscape. In his introductory essay, Broesi sketches out this issue’s framework with broad strokes of the pen. He describes a Europe of constant transformation. He touches briefly on aspects of the economy, trade, knowledge and science, but places most emphasis on the Europe of prosperous and independent consumers. These consumers constitute a new class, each member of which pieces together a personal Europe. That is facilitated by the new networks of, among other things, no-frills airlines and the tourist industry. En masse, these new Euro-citizens are causing a transformation of the landscape that is without precedent, because of its sheer scale. The other essays examine highly diverse and more specific themes. Mathis Güller writes about the new task for national museums prompted by a transformation of national identities. Ivan Nio, Angelika Fuchs and Wouter Veldhuis consider flows of migration and transnational networks, planning issues along national borders are mapped out by Arjan Harbers, and a concluding essay by Florian Boer and Christine Dijkstra addresses the consequences of recreation on an international scale.

One of the nagging questions after reading the bundle is what is in fact so typically European in the new Euroscapes presented. Much of what is described is, in its generality, applicable to the ongoing internationalization processes and transcends the European dimension. It seems as if Euroscapes is not so much an analysis but rather a means of looking at the world. In many respects the bundle presents an old-fashioned, Eurocentric perspective on global problems – it does deviate from that of the Eurocrats, but is Eurocentric ­nevertheless. What holds the whole thing together is a single point of order that the authors mention in the introduction: the new European landscape cannot be uniform, but must offer a variety of spaces and cultures. Accor­ding to the authors, uniform thinking within Europe cannot equate to wanting the same thing everywhere.

The fact that Euroscapes presents no analysis of the new Europe, but a view, is immediately obvious from the otherwise stunning photo-reportage by Bas Princen and Raymond Wouda. And just like every other view, it can set only a limited part of the new Europe in the spotlight. Even the added series of maps from the Bosatlas (the standard Dutch atlas), with a range of themes like history, climate and transport, Internet providers and flows of EU expenditure, does not usher in a searching analysis but serves only as an illustration in support of advo­cating a Europe of differences.

If you think about what actually distinguishes Europe from, say, the United States, Asia or Africa, then it is factors like the welfare state, the mixed economy with both market- and state-controlled aspects, and secularization. Another interesting aspect that draws attention in the series of maps is Europe’s greatest common denominator. It is not security (NATO or Schengen countries), nor economics (EU or Euro-zone), but humanism that seems (to my own surprise) to draw together most European countries, including Turkey and Russia. All the countries, with the exception of Belarus, are members of the Council of Europe, proponent of democracy, pluralism, human rights and fundamental liberties. There is, however, no evidence of any of this to be found in the dynamic world of Euroscapes. At the same time, it is notable that the argument of the authors for variety implicitly fits within this humanistic tradition.

This rather obligatory argument demands, in my view, a radicalization in order to be credible. In a certain sense, Euroscapes itself provides the means for doing this, and the essay by Nio demonstrates an initial step. The text by Fuchs and Veldhuis concurs to some extent. Both of these texts are about flows of migration and how these are possible. Nio focuses on the ‘ethnoscapes’ of the low-wage immigrant workers from outside Europe, while Fuchs and Veldhuis consider the new colonies of well-heeled northern Europeans who go in search of a pleasant living environment in the deserted countryside of southern Europe. Nio provides the most astute analysis. He uses the concept of multiple identities to describe the position of migrants and their way of life. This concept of an individual, ­plural identity (you are Turkish and European) is much more radical and modern than the idea of a variety of singular identities (you are Turkish or Dutch).

Using the example of life in migrant neighbourhoods like Amsterdam’s Baarsjes or London’s Brixton, Nio describes a reality that seems unreal against the backdrop of today’s xenophobic politics in the Netherlands, but it is certainly an issue. Proceeding from his analysis, the Muslim migrant is an extremely modern world citizen despite his ‘backward’ culture. This migrant lives in different worlds simultaneously: his homeland where his family lives, his neighbourhood with mosque, his workplace and his children’s school, the other migrant cities in Europe where compatriots live, and so on. This is all supported by the most advanced networks of Internet, mobile telephony, Al Jazeera and cheap flights. Nio demonstrates that this reality of a plural identity does not stand in the way of integration, but is in fact the very basis for it. A Europe of plural identities with mutually overlapping worlds offers more hope for a shared future than a Europe of differences.

Dirk van den Heuvel is an architect and researcher at the Delft University of Technology.