The Nightmare of Participation 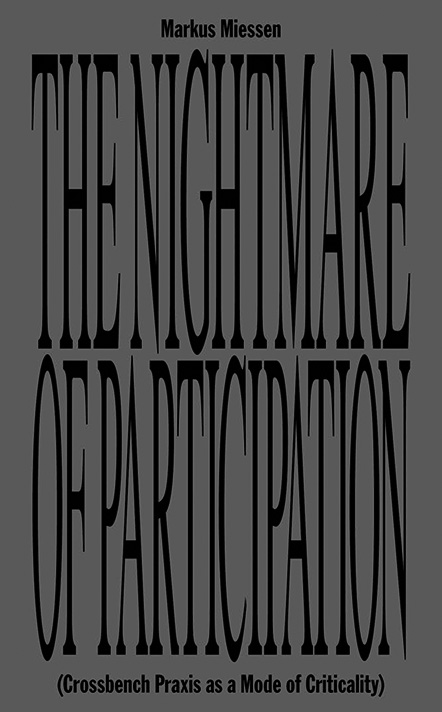 In his most recent publication, The Nightmare of Participation (Crossbench Praxis as a Mode of Criticality), Markus Miessen postulates an alternative scenario for what Douglas Gordon describes on the back flap as ‘pseudo-democracy ... in which cynical globalized Muppets, drained of all joy, enact outdated hollow rituals grounded in unquestioned capitalism, zombie-style political correctness and poll-driven mock democracy’. The only way out of this status quo ruled by consensus and pseudo-participation is through the nonviolent intervention of an uninvited outsider: the ‘crossbench practitioner’.

The Nightmare of Participation is the third volume in a series of publications in which Markus Miessen critically scrutinizes the phenomenon of participation. The first volume, in which he collaborated with Shumon Basar, titled Did Someone Say Participate? An Atlas of Spatial Practice, consists of a collection of short essays and descriptions of activist projects in which the boundaries of social, cultural, political and spatial conventions are sought. The contributions come from a diversity of people, ranging from Hans-Ulrich Obrist, Bas Princen and Armin Linke to Peter Weibel. The second book, The Violence of Participation, again with contributions by a varied group of thinkers and doers, investigates alternative forms of participation and different interpretations of the concept of democracy against the background of present-day Europe. In The Nightmare of Participation, Markus Miessen himself is the main narrator. He first of all observes and analyses the sphere of influence in which participation operates in all sorts of areas, in order to then formulate an alternative modus operandi of how we can act from a critical involvement in this sphere of influence and bring about changes, without being manoeuvred into the position of stakeholder.

Miessen – trained as an architect, but now working as a curator, educator, writer and consultant in the areas of urban planning, art and design – confronts us in the introduction with his twofold hypothesis: ‘Sometimes. All-inclusive democracy has to be avoided at all cost,’ and ‘in order to make decisions . . . conflicts can ultimately only be overcome and turned into practice if someone assumes responsibility.’ In order to clear the way for what Miessen calls the ‘post-consensus model’, he first looks at our conventional interpretation of the concept of participation and strips it of its apparent innocence. Participation is an empty concept; it refers to an action or process that in itself has no content. Nevertheless, the concept is permeated with false nostalgia and romantic longings with respect to inclusion (everybody has a say) advocacy and equality. In conventional notions of the democratic process, participation is equivalent to ‘every vote counts’ and ‘the majority has a monopoly on truth’. Despite the fact that participation is an ‘empty’ concept, in no context is it neutral. As an example, Miessen describes the other side of the referendum: participatory methods such as referendums are especially popular as political instruments with parties who do not want to burn their fingers on sensitive decisions. By deferring the choice to the public, they not only postpone the decision, but also let slide the responsibility with which that same public had entrusted them at the elections. In the meantime, however, they determine what can be chosen, and how. As such, the referendum undermines the fundamentals of our democratic system from within.

Another way in which pseudo-participation is instrumentalized in order to maintain certain power balances is the game of musical chairs played by leaders and powerbrokers. For example: the government or management asks the public for its opinion on this or that proposal (think for example of the layout of public space), the public gets involved and perhaps even thinks its voice is heard. But by taking part in this procedure, the public is deprived in the following stages of every ground for being able to criticize the realization of the plan. Apart from the fact that these public participation procedures never result in new policies or ideas, they are above all imbued with creating consensus and limiting or even eliminating friction. Reading Miessen’s critical exposition, it is easy to imagine how these sham procedures are implemented by authoritarian managements or an authoritarian government and can lead to pseudo-democracy.

This brings us to Miessen’s third critical comment on the bankruptcy of participation – an argument that also has frequently been brought up over the last few years in discussions on participatory art, community art and relational aesthetics – namely that in spatial design practices, the design process is indeed participatory in terms of form, but the intention of the work (and therefore its critical significance in terms of engagement) is not. In other words, if you look further, you come to the conclusion that participation is anything but a rose-coloured dream, and sooner a nightmare of power politics and conflicts of interest.

Miessen draws two important conclusions from this. First of all: consensus can never lead to change or innovation – whether in the development of knowledge, the design process, or in a society. And secondly: every form of participation always carries a conflict within it. In short, participation is war. Drawing upon the political theory of Chantal Mouffe, among others, on the potential of the agonistic democratic model, Miessen substantiates the necessity of conflict in order to effectuate change and innovation, as well as the crucial role that the involved outsider plays in order to start this conflict. Whereas Eyal Weizman, in his prologue titled ‘The Paradox of Collaboration’, propagates a radical refusal to participate as a last way out of political and ideological instrumentalization, the answer according to Miessen lies in dilettantism new style: infiltrating the system from the sidelines with critical involvement and unlimited interest, and by introducing conflicting information, ideas or methods, creating friction, thus disrupting the status quo.

The Nightmare of Participation is comprised of short dissertations, e-mail correspondence and interviews with third parties on seemingly divergent topics. Miessen himself describes this ambiguous approach as a ‘galactic model’, whereby each chapter can be seen as a planet revolving around an undefined void. Miessen’s argument moves through intellectual excursions from Stoic philosophy to an analysis of the developments that have led to the ideological crisis in the Left, a discussion of two management methodologies and their outlooks on intervention in a dysfunctional situation, a commentary on the commercialization of education and the disappearance of sanctuaries for radical thinking, and a critical analysis of the current state of affairs in architecture. Ultimately he arrives at the ‘crossbench practitioner’, the uninvited outsider who intervenes in a nonviolent manner in political structures, systems, situations or otherwise. This ‘involved outsider’ is the answer to the question of how architecture and other spatial and cultural practices can give form to this new modus operandi and create the necessary conditions for meaningful change.

If we ignore the seven mile boots with which Miessen at times runs through history or other fields and forgive him the hopscotch jumps in his argumentation, this little red book reads as a challenging and inspiring manifesto. The Nightmare of Participation not only makes us aware of our moral responsibility to critically examine the (political) power relations of every situation in which we participate – or let others participate! – it also formulates an ideological and working model for operating in an engaged manner in these situations without falling into the trap of consensus and pseudo-participation. Whether you are an architect, artist, curator or involved citizen.

Christel Vesters is a critic and independent curator. She studied art history and curating in Amsterdam, New York and London. She has curated various exhibitions and discursive projects on art and architecture and regularly contributes to international art magazines and art publications.