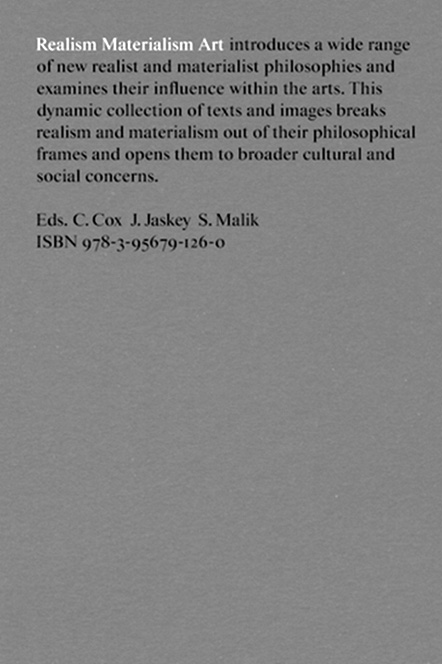 For some time now forms of materialism and realism have been haunting intellectual and cultural discourse, posits the new volume of essays Realism Materialism Art (RMA). The central tenet is that thought can think outside itself, it is held; reality can be structured independent of human consciousness. The editors could not have pinpointed a stronger trend: witness the bevy of exhibitions and seminars on the return of the object and its changed relation to the (in)human including: The Real Thing, Tate Britain, London, 2010; Speculations on Anonymous Materials, Fridericianum, Kassel, 2013–2014; and the series Posthuman Glossary, BAK, basis voor actuele kunst, Utrecht, 2015. Further, books and magazines have increasingly been dedicated to the challenges new materialist and realist stances present, counting the initiatives of Robin Mackay’s publishing house Urbanomic and its journal Collapse: Philosophical Research and Development among the most influential. Regardless of their design, the positions of the different projects concerned with the subject are often firm and inspiring, and a relief after the last decades’ reigning theoretical premise: that nothing exists outside discourse and its socially organized construction. RMA intends to introduce the variety of realisms and materialisms that often go under the heading of “speculative materialism.”1 The “art” of RMA’s title is comprehended as a “method for convening and extending” realism and materialism. Our question is how the editors conceive what they understand as a new position of art.

RMA is composed of thirty-five essays divided into six chapters: Matter, Object, Concept, Representation, Scale, and Speculation. While the themes function as a navigational device, the relations between them contest this categorization. For example, an interview with philosopher Graham Harman (Object) converses with philosopher and novelist Tristan Garcia’s contribution (Representation), both writers arguing for a productive force immanent to artworks, whether as representation (Garcia) or “art object” (Harman); philosopher François Laruelle’s work (Concept) is intent on using philosophy as a material instead of as a form of commentary, a framing device, its stance being picked up on in artist Amanda Beech’s essay that appears in Representation. Beech draws on Laruelle’s writings such as the acclaimed Photo Fiction, a Non-Standard Aesthetics (2012) pleading for an art that is interrogative, traversing categories, much like Laruelle’s writing does, trying to unify poetry and philosophy. For Beech, art should not be justified by either what she perceives as art’s Duchampian paradigm or an aesthetical prerogative. The theoretical questions and references returning in the various essays are both different and shared, in other words. The rhizomatic diagram that opens and closes RMA mapping the linkages between the contributions is in its place.

For the less initiated into the different historical philosophical materialisms and realisms and their contemporary alternatives, the first essay of philosophy professor John Ladyman gives a very welcome overview of the “matter” at hand. Departing from clear and distinct definitions of realism and materialism grounded in associated historical developments, he relates these to physical sciences and their objectives. Realism is then defined as based on “the idea that the world is independent of our beliefs and desires about it”; materialism pertains to the view that “all exists in matter, material forces and physical processes.” According to Ladyman, physics, “the ultimate science of matter,” should permeate today’s realisms and materialisms since it allows for the latter two to distinguish the “objectivity of real patterns.” Delineating the fluctuating borders between realism, materialism and physical sciences, Ladyman formulates the paradoxical challenge inherent in most of RMA’s contributions: to position realism and materialism in a world of global or universal scale, evermore accessible thanks to scientific and technical innovations while growing less tangible at the same time. Or, in philosophical terms, what the book’s realisms and materialisms have in common is an escape from what the philosopher Quentin Meillassoux in his book After Finitude: An Essay on the Necessity of Contingency (2006) described as “correlationism”: “The idea according to which we only ever have access to the correlation between thinking and being, and never to either term considered apart from the other.”2

Artist and writer Trevor Paglen, for instance, points to the contradictory functionings of the satellite EchoStar XVI, designed to continuously transmit pictures on innumerable television channels, but also containing a disc in which one hundred pictures is embedded, to last for billions of years. Time is reshaped on a planetary scale here, while it is synchronized with a historical conception of it, acknowledging a distant future surpassing limits that can be rationally conceived.

A universe such as Paglen describes it can exist through mathematical descriptions, thus, Meillassoux would argue, outside of thought and language. “Like most philosophers,” the apparatus involved in such mathematical calculations is obliterated, holds McKenzie Wark in his contribution to the book, known for his writings on media theory. The apparatus is then defined as an “assemblage of labor and machine,” which Wark terms “inhuman,” in contrast to Meillassoux’s “nonhuman” mathematical description. Engaging with the apparatus enables direct confrontation with the problems of the moment – such as climate change, Wark states. The alternative path as a departure from the correlation between thinking and being might not be a philosophical one, he argues. Nonetheless, it dispenses with current philosophy’s spectacular pretensions to the absolute. The question implicitly asked, and rightly so, is how to synchronize the evermore exorbitant philosophical quests, in a literal and figurative sense, allowing them to answer “our times.”

What becomes clear while reading RMA’s diverse essays is that the new realisms and materialisms it discusses intend to present alternative methods opening up new fields of inquiry. Next to the compact of labour and technology (Wark), and science (Ladyman, Meillassoux), art offers these possibilities. This is not new in itself, as the historical avant-gardes, for instance, have demonstrated before. Contemporary art’s status vis-à-vis recent scientific insights has to be redetermined, however. There is “reason to destroy contemporary art,” as one of RMA’s editors Suhail Malik polemically argues, since all contemporary art is correlationist, equating thinking with being, subject with object. Whereas contemporary art relies on the “co-constitution of art object and (sometimes) human subject” after Conceptual art, the latest scientific findings, in which the realist variant of speculative realism is grounded, force one to disconnect the two.

Witness the example of Paglen. Malik’s co-editor Christoph Cox challenges this line of thought proposing not an art modelled on science or philosophy, but a sonic philosophy. Cox opts for a sound art that runs parallel to and sometimes diverges from Conceptual Art on which contemporary art is largely based. Sound’s existence independent of objects affirms an ontology of flux, he argues: sonic changes “happen,” regardless of objects. These changes are called events or effects, in analogy with sound effects.

The consequences for contemporary art as a poiesis, a making and world-creating, cannot yet be overseen, observes Armen Avanessian, founder of the “Speculative Poetics” research platform. Contemporary art “projects into presence a temporal unity that is in principle futural or horizontal and hence speculative,” he writes citing philosopher Peter Osborne on contemporary art. The speculative is not exclusive to art. Nor, as Beech notes, is it innocent. If aesthetics has a place, as in Harman’s object-oriented ontology, it must be perceived as enabling an alternative relation to life, treating a work as “deeper than all their specific details.”

Approaching current materialisms and realisms in their various methods and forms, RMA can be called the “primer” on Speculative Realism indeed. Gathering different standpoints within SR, without exhausting them, it lends credence to the philosophy’s opponents as well. SR’s case is defined more acutely in this manner: traditional philosophy has been unable to sever the ontological from the epistemological; scientific innovations and models direct the way, out of the impasse. Especially when concentrating on the position and functioning of art within SR, one has to conclude that SR contains a renewed debut of an ongoing debate concerning the relation of art to life. However, the fact that life has drastically changed in recent years – these changes being not unrelated to scientific inventions – SR urges art to consider alternative artistic methods, modes and techniques. Established paradigms are rethought. Inevitably affected by these concerns, RMA inspires reflections on both life and art as acts.

2.  Quentin Meillassoux, After Finitude: An Essay on the Necessity of Contingency, trans. Ray Brassier (London: Continuum, 2008), 5.