The Return of Religion and Other Myths: A Critical Reader in Contemporary Art 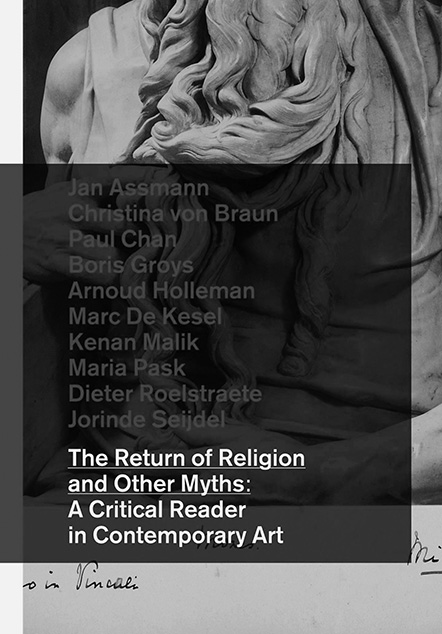 The ‘return of religion’ is a subject that has occupied minds ever since the invention of secularization. Today it is often asserted that twenty-first century Westerners are being confronted with an unexpected return of fundamentalist, or secularized, religion, which is suddenly posing new questions and dilemmas for our postmodern, disenchanted, digital era. This creates a widespread feeling that we need to relate to religion again. But doesn’t every era reinvent religion, both its demise and its return? Is the return of religion perhaps not the rise of a new form of fundamentalism? Aren’t we running the risk of believing in a myth? Shouldn’t we at least have doubts about this so-called return?

These are central questions in the collection of essays recently published by the bak (basis voor actuele kunst). The title of the book, The Return of Religion and Other Myths, is as pertinent as it is confusing. Does the characterization of ‘myth’ refer here to a repudiation of religion and its return (as the editors emphasize in the foreword, ‘religion is in many ways still on the wane’)? Or to the functioning of the return of religion (does the present return of religion in fact allow critical iconoclasm)? In their introduction, the editors approach the problem from two sides: on the one, there is the fundamentalist attack on the image, the cartoon dustups and Al-Qaeda, but also Christian fundamentalism; and on the other, the inspiration that religion continues to offer for the contemplation of the image, art and spirituality. The present situation thus calls for an interpretation of the role of art in these modern debates. And that immediately points up the collection’s fundamental tension, that of being a critical enquiry into the return of religion, or its confirmation – even if simply by filling a volume with interesting analyses of the relation between art and religion.

The inevitability of the link between religion and art is what Jan Assman goes into in his essay ‘What’s Wrong with Images?’ He emphasizes how images, from the time they were first banned (approximately 3500 years ago) until now, are interwoven with religious worship. Assman is not particularly interested in dismissing the return of religion, but a better understanding of its history might bring about a way of relating to images that learns from the past: ‘The solution seems not to be the prohibition of images but the acquisition of iconic literacy.’ Therefore this is not so much about negating myth as it is about gaining insight into how religion has determined the effect of images – and still does.

In ‘The Image as Crime’, Marc de Kesel emphasizes that even in an overly visual age such as ours, images are still connected with the ban on the image, at the boundaries of the visible. Contemporary art is also connected with the mythical confirmation and transgression of the ban on imagery. The fear and fascination inherited from religion for what lies beyond the image is not so easily allayed: the return of religion, true or not, will again have to relate to this productive fear.

Arnoud Holleman’s ‘On ne Touché pas: (sic) On Copyright and Iconoclasm’ makes a link that exposes the selective working of myth: these days, there is a battle going on between the religious limitation of the freedom of speech and the secular defence of this freedom. However, in describing his hassles with the reuse of a porno film in a work of art, the author makes a comparison between the prohibition of images and the vicissitudes of contemporary copyright laws. When religious believers want to forbid images, everyone brandishes the secular freedom of speech, but in European copyright law, there is an almost religious worship of the image that seriously hinders that same freedom of speech: ‘You could say that the European law ignores the second commandment in favour of the “idol”.’ Beneath the superficial return of religion – Islam versus Christian-humanist tolerance – there is a religious undercurrent, the worship of the image. For Holleman, too, the issue is not so much about negating myth, but about using it to continue to make criticism possible, also against itself.

The conversation between Boris Groys and Maria Hlavajova might present the clearest view of the return of religion in today’s society. Groys emphasizes the fact that the idea of a return of religion also was rife in the nineteenth century. The impact of the present return will depend upon our current media landscape. In a postmodern, hyper-visual age in which a meaningful horizon is up for grabs, both religion and art are potential alternatives. The only question is which way it will go. For Groys, in our ‘disenchanted’ and yet religious era, it is important that we gain insight into new forms of fundamentalism.

The problem perhaps becomes clearest in the art project Beautiful City Book List by Maria Pack. A list of web links to mainly religious books, based on personal preference, increases the tension between the personal and the public. The project purposely does not answer questions about truth, desirability or canonicity, but offers new combinations through the juxtaposition of all sorts of references. The call for the meaning of myth remains, also in the many unstructured hyperlinks from which the reader must make his or her own selection.

The book succeeds in presenting many different, fascinating views on the connection between religion and art. Most of the essays, however, are not about whether or not the return of religion is a myth. What gradually becomes clear, and this might sooner be a shortcoming of the spirit of our times than of this collection, is the necessity for dichotomy as regards that myth: Is the return of religion conservative, or does it offer the possibility of criticism? If art indeed has a connection with religion, and embraces the return of religious definitions of the image, for example, it becomes important to make a distinction between forms of thinking, religious or artistic, that can stimulate critical thought, and forms of thinking that, in the words of Groys, might conceivably turn the twenty-first century into a fundamentalist drama. Only when an alliance can be struck between utterances that give occasion for critical intervention and those that contribute to fundamentalism or play into the hands of intolerance, can we truly point to the myth of ‘the’ return of religion.

Ernst van den Hemel is a doctoral student in the history of christianity and teaches literary theory at the University of Amsterdam. He is the author of Calvinisme en politiek. Tussen verzet en berusting (2009). He additionally is involved with the squatted gallery ‘Schijnheilig’ in Amsterdam. www.schijnheilig.org