A Thousand Machines: A Concise Philosophy of the Machine as Social Movement 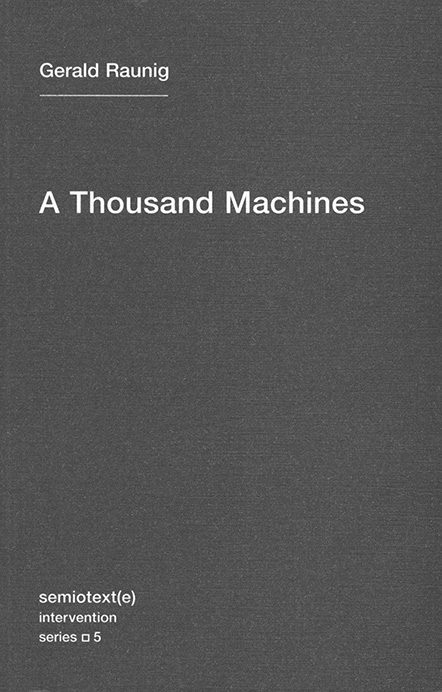 ‘Is this about a machine?’ This is the central question Gerald Raunig asks himself in his latest essay ‘A Thousand Machines’. After having read through the 120 rather well written (translated) pages – notwithstanding the overuse of the term ‘concatenation’ – one cannot help but wonder. What is it exactly that this ‘concise philosophy of the machine as social movement’ – as the book’s subtitle promises – wants to achieve? Is it a commentary on the philosophy of Gilles Deleuze and Felix Guattari (as well as Karl Marx)? A brief history, etymology, genealogy of an important conceptual fragment of Deleuzo-Guattarian thought? An application of the notion of the machine to a variety of aesthetic practices? Or indeed an attempt to theorize (as well as perhaps inspire) a particular type of contemporary social movement by way of French philosophy from the 1960s and 1970s?

The stylish little essay-machine that Raunig attempts to construct wants to be all of the above and possibly more. The fact that it fails as ‘a philosophy of the machine as social movement’ is rather secondary as in the process it produces a number of interesting insights. But we are getting ahead of ourselves.

The essay opens with a very elegantly constructed literary-cinematic triptych composed of Flann O’Brien’s novel The Third Policeman, Claude Feraldo’s unjustly forgotten masterpiece Themroc and Vittorio de Sica’s famous neorealist adaptation of Ladri di Biciclette (Bicycle thieves). In many ways this tryptich, smartly connected (or, as Raunig and his translator would have it, concatenated) by the refrain of the bicycle, sets the tone for the different variations of the machine theme we will encounter later on in the text.

First, there is the process of cycling as man-machine interface, an assemblage defined by the relationship of the merging flows of cyclist and cycle, thereby dissolving both their subjectivity. Then there is the Fordist social machine whose iconic representation is the figure of Themroc the cyclist on his way to the factory almost merging with a cyclist-coworker according to what seems to be an exact timetable (they meet in the middle of the road leaning against each other for the rest of the journey). Here one gets the machinic relation perpetuated by a mode of social organization formatting or moulding its subjects (workers) while extracting their élan vital in order to transform is into labour power (in Deleuzo-speak: social subjection and machinic enslavement). Simultaneously, Themroc’s animalistic rebellion, his successful revolutionary regression into the primal netherworld of mother- and sister-fuckers is taken by Raunig to relate to the post-autonomous notion of exodus as inventive political machine (though it might as well just be Feraldo taking the piss out of it). Finally, the smooth machine of bicycle thievery, operating like a diffuse, incomprehensible swarm is presented as an ambivalent social machine with the capacity to either create an emancipative assemblage of resistance to dominant forms of subjectivation via solidarity / invention / non-hierarchy or a fascistoid assemblage based on the same principles.

After this quite brilliant allegorical introduction of the machine-theme, Raunig turns to a theoretical elaboration of the concept. He briefly sketches the etymological and cultural development of the notion of the machine from the Middle Ages, arriving quickly at Marx’s ‘Fragment on Machines’, a text that develops his influential notion of real subsumption, that is, a state of capitalist development marked by the full absorption of the physical and intellectual potential of living labour into the productive machine. Particularly pertinent in this context is the notion of the general intellect, approaching a fully developed capitalism as a machine that objectifies (and thus alienates) the social body’s entire intellectual capacity in order to transform it into a means of total domination / exploitation. Raunig alludes to a possible critique of such a totalizing notion of the machine by way of a mere nod to post-workerist Marxism: ‘The concatenation of knowledge and technology is not exhausted in fixed capital, but also refers beyond the technical machine and the knowledge objectified in it, to forms of social cooperation and communication, not only as machinic enslavement, but also as the capacity of immaterial labour – and this form of labour, as especially (post-)Operaist theory would later insist, can destroy the conditions under which accumulation develops’ (25–26).

Clearly, this is a most interesting statement that would merit some elaboration. Are there social processes at play today that support such a claim? To what extent does machinic theory and perhaps even a machinic practice help to confront a capitalist system that clearly has become unsustainable? At this point, however, Raunig refrains from a head-on engagement with these questions, instead turning to an elaboration of the machine as it is found in the work of Deleuze and Guattari, stressing ‘the relationship between streams and ruptures of assemblages, in which organic, technical and social machines are concatenated’ (30). This is of course correct. Machinic thinking, as Raunig argues, provides an ontology that moves beyond the dichotomy man / machine, resisting the (for instance McLuhanian) simplification of technology as extension of human faculties, instead posing the question (with Simondon) of ‘how man becomes a piece with the machine or with other things … (animals, tools, other people, statements, signs or desires) … in order to constitute a machine’ (32). The machinic, one might say, is the milieu of transversal communication out of which organization (forms, bodies, structures, etcetera) emerges.

However, as the connection between postoperaist Marxism and Deleuze / Guattari is crucial to Raunig, it would have been helpful to make it at the beginning of the essay and then quickly move beyond it. It should have been his point of departure for fleshing out his notion of the machine as it is at work in within the ‘matter’ of contemporary social life. The more empirical chapters on ‘theatre machines’, ‘war machines’ and ‘mayday machines’ are rather a mixed bag in this respect. They are only partly contemporary and largely remain at the level of aesthetics.

It is only in his conclusion that Raunig returns to the question of real subsumption and general intellect (largely by repeating Paolo Virno’s well-known line of argument) but as in the meantime hardly anything has been conceptually added to matter, he cannot really add anything new to the discussion. This is frustrating as the notion of the machine seems to be an ideal vehicle for taking the conceptual and practical puissance de l’invention of the two perhaps most important strains of 1960s / 70s’ political thinking into the twenty-first century. What comes to mind is Michael Hardt and Antonio Negri’s treatment of the contemporary metropolis in terms of a machine (Hardt and Negri 2009), that is, an anorganic multiplicity consisting of layer upon layer of possible productive encounters. One cannot, of course, expect the old guard themselves to break through their conceptual limitations. But someone like Raunig could have. However, doing so would have meant not only to move beyond Marx but also beyond Deleuze.

The problem that Raunig as well as many of his Deleuze / Guattari-inspired colleagues have is one of being at once too close and not close enough to their masters. Raunig is too close to their writing particularly in his use of terminology. One might say that he does not properly ‘translate’ their machinic thinking into his own theoretical project. This comes clearly to the fore in his more ‘empirical’ chapters. These are informative and at times even fascinating chapters. However, his extensive reliance on the Deleuzo-Guattarian terminological apparatus, without being able to sufficiently reproduce their machine of expression, makes it very difficult for the uninitiated to grasp the analytical force of machinic thinking. The reproduction or even application of Deleuzo-Guattarian philosophy is of course not the issue here as such an endeavour goes contrary to their thinking. It is well known that the French couple defined philosophy in terms of le survol, that is, a qualitative movement of thought that ‘observes’ while ‘flying over’ thus inventing concepts that allow thought to co-evolve within its own matter of concern. Hence by not daring to stray further from Deleuze and Guattari’s conceptualities, Raunig departs from their perhaps most essential methodological demand: conceptual creativity.

Sebastian Olma studied political science, sociology and philosophy in Leipzig, New York and London. He holds a PhD from the Centre for Cultural Studies, Goldsmiths College. He has published on Vitalism, Autonomist Marxism, and questions of social temporality and creativity. Living in Amsterdam, he works as a consultant / researcher. For more information contact: info@thethinktank.nl.