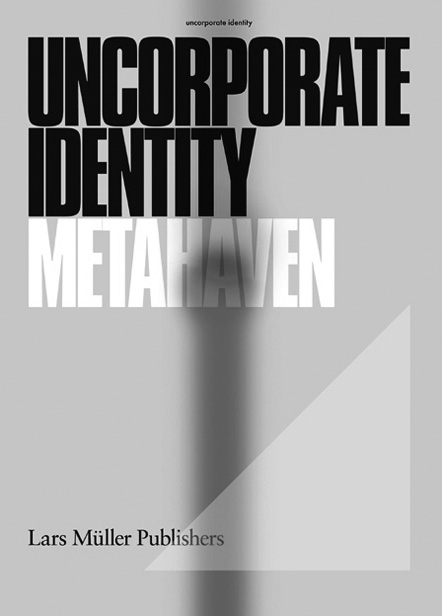 In one of his various rants directed at the irresistible rise of the design professional – a review of Bruce Mau’s book Life Style – Hal Foster laments our present era as one in which ‘the aesthetic and the utilitarian are not only conflated but subsumed in the commercial’. Now everything is designed. Here, the avant-garde project of art’s dissolution into life finds it’s apotheosis in contemporary design. For Foster, what is more awful than the annexation, the autonomy or semi-autonomy of art is design’s indifference to that which it subsumes: ‘Not only architectural projects and art exhibitions but everything from jeans to genes – is regarded as so much design.’ The grammatical alignment here of jeans with architectural projects (utilitarian) and art with genes (human / sacred) should be noted, it mirrors exactly the rule of equivalence that capitalism commands and which Foster hopes to wish away.

Conceptual design group Metahaven more or less situate their practice within this grammar of conflation and indifference that Foster rails against. Yet it is possible to understand this situation as structural rather than willed. Taking as a starting point this assumption, that all is designed now and that design is completely complicit in the domination of all human activity by commodity exchange, Metahaven seek to occupy this complicity, ‘squat’ it if you like. Acknowledging that this situation makes criticality and affirmation increasingly difficult to separate, they seek a merger between these two poles, a mode of operating in the contradictory and cramped spaces of neoliberalism’s triumph, which, for better or worse, tends towards irresolution.

In Uncorporate Identity, Metahaven map out problems with corporate form, identity and democracy under the tyranny of networked power: ‘Uncorporate Identity concerns the relationship between an organization and its tangible forms.’ Rather than seeking to unmask and expose the truth behind the bland logos, brands and PR projections of both corporate and State forms, Metahaven employ critical and creative strategies to make more present the opaque power that drives these proliferating abstractions. To examine what is ‘hidden in plain sight’, we are told, involves the deployment of two strategies – iconoclasm or defacement, and crisis, what happens after an organization fails yet its logos survive. How exactly these strategies are deployed and developed is not completely clarified in the book, but they do signal a move away from a politics of opposition towards overidentification, indiscernability and the deepening of contradictions.

Uncorporate Identity is equally a critical anthology of texts on the problems of network power today, essays in the cultural analysis of design and a showcase of some conceptual design projects turning around related themes of the projection and subversion of this power. It is one part Life Style, one part S, M, L, XL one part Empire. Contributions, in interview form; from anthropologist Michael Taussig, architect Pier Marco Aurelio and art critic Boris Groys, network theorist David Singh Grewal, in fictional form; China Miéville, Keller Easterling, the theoretical essays ‘The Mirror of the Network’ by Marina Vishmidt and Metahaven’s ‘Europe Sans’ all make for original and substantial reading and help to lay out the landscape Metahaven aspire to analyse.

A preoccupation across several contributions involves establishing differences between forms of network and soft power. This inquiry in turn supports the central argument: ‘All such forms of power, this book argues, are matters of design.’ Metahaven’s projects are less traditional design briefs instead, taking the form of inventive, self-initiated open-ended surveys deploying critical design in a framework closer to conceptual art. ‘Graphic design’ is the iteration of more or less interchangeable basic forms – triangles, squares and circles, ‘design’ is a question of powers’ transmission through protocols, scenarios, architectures and standards.

Of the projects presented, Stadtstaat (2009) – a proposal for the merger of the European cities of Utrecht and Stuttgart into a regional city state, is one of the canniest and fully realized. It fits best Metahaven’s proposal for ‘speculative design’, founded on the premise that ‘the projection of power and the assumption of an image are ways to create a world and make it seem inevitable.’ Stadtstaat is propelled into theoretical presence by the literary device of an anonymous exchange of letters between two inhabitants and ‘Friends’. The letters are displayed alongside a series of posters, designs for Stadtstaat’s ‘Information Architecture’ including: ‘Trust’, a model for an online social network, and ‘Axis’, the ‘Stadtstaat Interurban corridor’, that is the renaming of an existing highway between the two urban conurbations, as well as credit and voting cards, a telephone directory and logos for invented private-public enterprises.

A more graphic and less theoretically driven project, LogoParc, consists of an ambitious computer-simulated landscape of South Axis, a recently established ‘hotspot in the global world of finance’ situated in Amsterdam. Metahaven stripped away the glass skin of existing buildings to expose a grey theme park of undifferentiated skeletal concrete forms penetrated by the sedimented flows of international capital – parodying the foreclosed prospects of such nascent non-spaces after the 2008 financial crisis its redesign is characterized as ‘banlieue deluxe’, ‘Frankfurt am Cheap’ or ‘Dubai near the Canals’. Global and postmodern space is modelled as an embattled space of graffiti, walls, peripheries, discourse inscription and defensive form.

One of the important terms that frequently reappears across Metahaven’s interviews and debates with cultural intellectuals is conflict. ‘Do you think conflict can be productive?’ they demand of David Singh Grewal. The question derives from a central interest in the thought of post-Marxist political theorist Chantal Mouffe. Mouffe’s contribution to the book is taken from a talk given in 2007 at the seminar ‘Regimes of Representation’, organized by Metahaven in Bucharest’s House of the People – formerly Nicolae Ceauşescu’s Presidential Palace, now both the seat of government and a contemporary art gallery, MNAC. Alongside Ernesto Laclau, Chantal Mouffe has developed a theory of ‘radical democracy’ predicated upon a mutation away from what they understand as the Marxist overemphasis on economic determinism and privileging of a essentialist subject – the working class – and towards a theory of the constitution of social agents privileging subjectivity and the processes of identity formation. At the centre of their shared understanding of the political as opposed to formal politics is a current of under-acknowledged, yet primary, antagonism and conflict. The democratic resolution of politics and the political, for Mouffe, would involve a way to ‘acknowledge on the one side the permanence of the antagonistic element of conflict, and on the other side allow for the possibility of its taming’. This would amount to, in Mouffe’s words, ‘a third type of relation … which I have proposed to call agonism.’ Mouffe imagines the construction of institutions in which conflicts can come to the fore without breaking a basic common bond and democratic premise. Her formulation of politics and the political in turn underpins Metahaven’s approach throughout the book. This has its limitations – the protocols, limits and aporias of a competition between alternatives within a conscripted arena can be discussed and subverted but not overturned completely. Europe’s borders and a Eurocentric view of Western capitalism are outlined, critiqued but ultimately affirmed. The complicity of representational democracy not only with the free market but as a presupposition of capitalist exchange per se is underexamined and considered only as a problem of power. The dependence of formal equality upon the presupposition that all labours count equally and that, as Marx asserts, ultimately money ‘is the power which brings together impossibilities and forces contradictions to embrace’ is entirely outside of this purview. Apprehension of these fundamentals would be key to any further development of the practical research Metahaven wish to pursue. These insights, which they come close to apprehending in their pamphlet White Night: before a manifesto (unfortunately not reproduced in the book), would bring them closer to a non-identitarian view of power and a design analysis that sees in surface not just the mirror of interchangeable forms of abstract power but a manifestation of social relations driven and distorted by the value-form.

Endearingly, the book is ambitious and irreverent, most problematically it is less than transparent about Metahaven’s need to market themselves as a professional practice. It should be no a surprise that these parts do not make a whole – in toto, the reader will find neither a coherent theoretical programme nor the communication of a robust design practice, but they may find some gems, both in the form of individual contributions and projects, which disturbs existing forms of engagement with these terms.

Anthony Iles is a writer and editor based in London. He has worked for Mute (metamute.org) and together with Mattin coedited Noise & Capitalism (2009). See: www.arteleku.net. With Josephine Berry Slater, he wrote ‘No Room to Move: Radical Art and the Regenerate City’ (in Mute, October 2010).