Will Anything Come of It?

One Year in the Wild, Jeroen Boomgaard (ed.), Professorship in Art and the Public Space / Gerrit Rietveld Academy, 2004 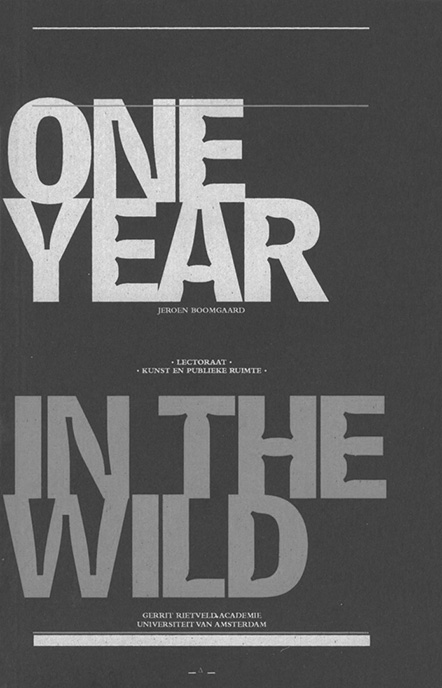 Last year, with beﬁtting pride and ambition, the Gerrit Rietveld Academy and the University of Amsterdam (UvA) instated a Chair in Art and the Public Space with the support of the Zuidas Virtual Museum and SKOR, to which Jeroen Boomgaard was appointed as Associate Professor. The combination of supporting institutions immediately indicates in what context this post operates: on the one hand, the Bachelors / Masters structure which must help to bridge the gap between higher vocational education and university education; on the other, the practicalities of one of biggest construction projects in the Netherlands today: Amsterdam’s Zuidas (‘South Axis’). On an extend­ed site along the A10-Zuid ring road, above which ­construction will also proceed once the infrastructure is ­‘docked’ below ground, a new ‘skyline’ is being constructed for the Dutch capital, slated to become the new business and cultural centre of the city. As with much new public space, the project naturally merits a new vision for the public art that is, self-evidently, being planned in conjunction with it. Jeroen Boomgaard’s associate professorship is speciﬁcally intended to help shape that new vision, in tandem with the ‘supervisor for art in public space’, Simon de Hartog, and his team. Such a supervisor’s post is itself unique – never before has art been so heavily represented at the level of administrative supervision of project development as here – and the combination with the professorship leads one to suspect that Zuidas is an area where the integral development of public space and art is for once being taken truly seriously.

A question that immediately springs to mind if one opens the associate professor’s ﬁrst ‘annual report’ is therefore whether anything will come of it, this public art at Zuidas? After reading it, the answer must be: we cannot tell yet.

The Dutch / English publication, One Year in the Wild, is introduced by Boomgaard as ‘a report on an expedition’. From the short chapters by Boomgaard and others, it is evident that the expedition has only just begun, and for the meantime primarily concerns reconnaissance, the mapping out of the project area in a general sense. One thing be­comes apparent fairly swiftly: it seems to be the explicit intention of Boomgaard cum suis to leave that map blank for as long as possible: ‘... the present shortage of the planless forms the basis of the appeal now being made to art for the public space.’

Boomgaard arrives at this insight on the basis of two trains of thought: the ﬁrst is rooted in an analysis of contemporary artists’ strategies that strive to initiate processes in which public space and the people using it are actively involved. This kind of ‘process art’ often fails to result in lasting work, if any at all, but it does symbolize the core of what public space can or should be: ‘A public space should, ideally, be an open space where nothing is set and everything is possible: it constitutes, in a sense, the heart of democracy, because debate and opinion formation can take place there.’

At the other end of the spectrum there is the indomitable propensity of real estate investors, government bodies and other commissioners to deﬁne everything, including works of art, within a plan area at as early a stage as possible. Investors and directors like stability, not surprises. Thus the ‘shortage’: in a prestigious setting like Zuidas there is ­little place for ‘the planless’.

But no matter how desirable as a counterweight to the planners, who try to ﬁnd a function for every piece of ‘leftover space’, this lack of plan or function also has its artistic and societal snags. In his article ‘Authenticity and construction’, Boomgaard ­describes how process art can degenerate into consensus art, and the artist into a ‘concept manager’ in the midst of ­construction bigwigs who ­misuse the artist in order to channel the urges for public consultation and civil disobedience of local residents into a symbolic and thus innocuous artistic process. Here Boomgaard quotes Paul Meurs, who commented: ‘By virtue of his role, the concept manager is doomed to operat­ing in the margins, since he can only attain freedom if he stays away from the actual power.’

Boomgaard subscribes to that vision, and in the ﬁve ­articles bundled here he ­actually comes to a fairly ­pessimistic vision for the existing opportunities for art in public space. Art that is not socially engaged soon becomes simply decorative (he calls Tom Claassen’s dog sculpture at the ABN Amro bank ‘the bronze equivalent of Bartje in Assen’), while engaged art ­seldom results in a sculpture and, if it does, ‘suffers from a lack of ambivalence’. He continues: ‘However subtle a work of art may be, the big machinery of institutions, curators and government, which wants to use art to stage its own involvement with the world, will not tolerate any confusion and strictly rules out any possibility of different layers of meaning. Thus in the history of committed art, text has moved from the artist to the target group to end up with the party placing the commission and the government. Involvement has become a set of regulations.’

The other authors who contributed to One Year in the Wild also subscribe to this vision. ‘All too often, the initial idea of the artist’s original concept is, in fact, realized in watered-down and adjusted form’, writes Hanne Hagenaars. And Xander Karskens notes, ‘Increasingly often, art appears to be routinely deployed as a planological adhesive in urban architectural designs, as a way to give public spaces a more human face’. The issue is there­fore ‘whether art is at all able to hold its ground, in view of the far-reaching process of coding which the urban context is undergoing’. Karskens poses the question, but has no response that will cheer up artists or commissioners. Referring to unofﬁcial forms of urban decoration such as grafﬁti, posters and ‘other exponents of street culture’ as ‘street inﬁltrators [that] effectively complicate the task of reading of our everyday environment’, he concludes: ‘The spontaneous, organic, direct character of such statements does not lend itself to visual art speciﬁcally commissioned for the public space.’

And do the artists who have contributed to this annual report see more light on the horizon? Orgacom states that ‘if the role of the artist can be more clearly formulated and veriﬁed, possibly being formulated in terms of supply, this would increase both the autonomy of the artist and the ­project’s added value for the municipality and project ­developer’. With this, the artists identify themselves almost as caricatures of the ‘concept managers’, who were effectively knocked for six ­earlier in the book. Boomgaard’s proposal for a study under the header ‘Station ¿At Odds?’ would ‘seem an impossible task‘, Harald Schole comments. He continues, ‘The state of being “at odds”, or contrary, threatens inherently to isolate art from its assigned location, the speciﬁc site. Paradoxical proposals put art at odds with the urban entity, the station and, above all, put art within its domain. In such a ﬁeld of tension, “at odds” is a priori accepted and art is protected from external influences. In this way, contrary art has found a safe haven.’ Which takes us back to the initial ­problem: how to leave space for the indeterminate, the unplanned, in a development project costing billions? Reading this ﬁrst annual report of the Professorship in Art and the Public Space is not immediate cause for ­optimism.